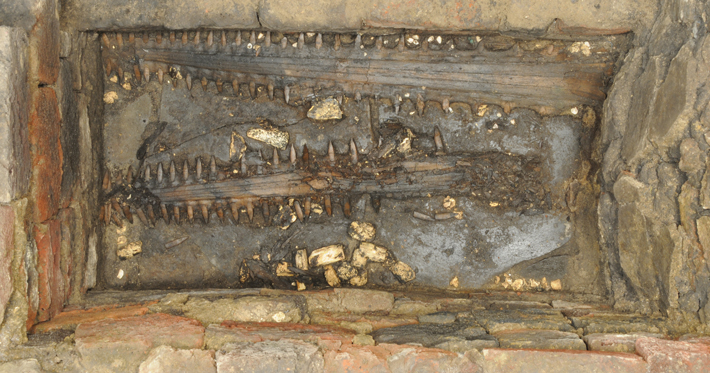 Mexican archaeologists have discovered a 39-inch-long sawfish blade at the bottom of a stone box packed with thousands of other ceremonial objects at the Aztec religious complex in Mexico City known as the Templo Mayor. This isn’t the first sawfish blade excavated there—archaeologists have found 77 so far—but it is possibly the largest, says the project’s director, Leonardo López Luján. Sawfish, a type of ray, had deep spiritual significance for the Aztecs because the fish was considered a hybrid of earth and sea, says archaeologist Alejandra Aguirre. The blade, its sharp teeth intact, was the last object to be excavated from a deposit containing some 11,800 artifacts, including the carcass of a wolf dressed in gold armor (“Aztec Warrior Wolf,” Top 10, January/February 2018), birds, and thousands of snails. Known as Offering 174, the box was interred under a floor during the reign of the emperor Ahuitzotl (1486–1502) and, according to Aguirre, may be a kind of tribute to the expansion of the Aztec realm under his rule.