Was There A Real King Arthur? 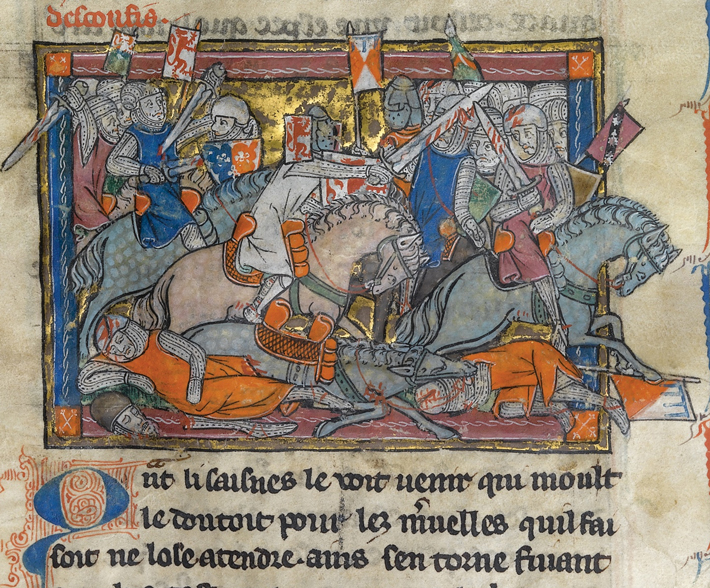 King Arthur has captured the popular imagination in a way that very few legendary characters ever have. The extensive list of books, television shows, movies, and video games that are based on Arthurian lore demonstrates just how ingrained he has become in world culture. But one contentious question has divided both scholars and enthusiasts for centuries: Was there an actual King Arthur who ruled Britain during the Dark Ages?

The main source for the Arthurian legend is Geoffrey of Monmouth’s twelfth-century book The History of the Kings of Britain, which chronicles the lives of the earliest British rulers. Although there are a few sparse references to an “Arthur” figure in documents from the ninth and tenth centuries, Geoffrey gives the first extensive account of King Arthur’s life and exploits. The story begins when Arthur is conceived at Tintagel Castle, where the wizard Merlin transforms King Uther Pendragon into the likeness of Gorlois, the Duke of Cornwall, so that Uther can spend the evening with Gorlois’ wife Ygerna. Arthur later inherits the British throne at the age of 15 and leads the Britons in several epic battles against the invading Saxons, eventually defeating them. He goes on to extend his empire to Ireland, Iceland, Norway, and Gaul, before being betrayed by his nephew Mordred and killed in battle.

While many familiar aspects of King Arthur’s story are included in Monmouth’s version, he does not mention Camelot, Lancelot, the Holy Grail, the sword in the stone, or the chivalric Knights of the Round Table. According to Bournemouth University archaeologist Miles Russell, many details were added to the stories centuries later to make Arthur a more appealing figure. “Truth be told, the Arthur of Geoffrey of Monmouth is a deeply unlikable sociopath, a violent, quick-to-anger, murderous thug,” says Russell. “He is someone who very much fits the Dark Age idea of a successful king, but not a hero for the Middle Ages.”

Monmouth’s account of Arthur is frequently derided by today’s historians, as it was even by his own peers. At best, he is chastised for getting his facts wrong; at worst, he is accused of inventing the entire tale. Monmouth himself claimed to have simply translated a very ancient book into Latin, but that source material has never been identified. Furthermore, no proof of Arthur’s existence has been uncovered, even at Tintagel. “There is no evidence that anyone called Arthur lived there,” says Russell. “Nor is there any archaeological evidence to support the existence of Arthur as a real person.”

Russell believes that Monmouth cobbled together various different ancient tales, characters, and episodes to create his now-beloved Arthur figure. It is not an entirely original story, as it borrows heavily from the exploits of other well-known legendary rulers, especially Ambrosius Aurelianus, another British warlord who won a decisive battle against the invading Anglo-Saxons. “It’s clear that rather than inventing everything, Geoffrey used a variety of sources, including folklore, chronicles, king lists, dynastic tables, oral tales, and bardic praise poems, in order to create a patriotic British narrative,” he says. “Arthur is an amalgam of at least five characters. He is, in effect, a composite Celtic superhero—the ultimate warrior for the Britons.”