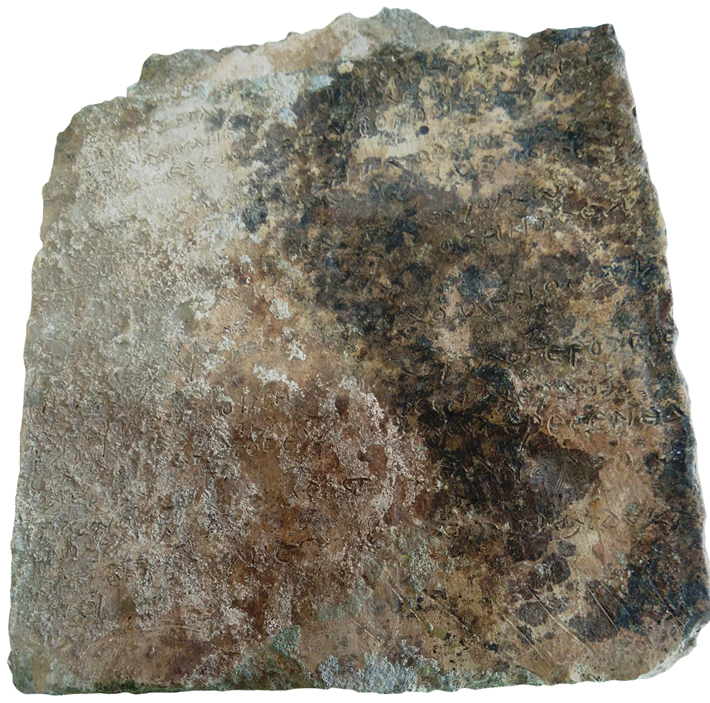 When an inscribed brick was first found amid a heap of discarded building material in a village outside the sanctuary of Zeus at Olympia, it appeared to be nothing special. Now, to researchers’ great surprise, they have learned it contains an excerpt from the Odyssey, the epic poem that tells of the Greek hero Odysseus’ 10-year journey following the Trojan War. The poem, which relates events of the twelfth century B.C., is thought to have been composed in the eighth century B.C. and was first written down in the sixth century B.C. Based on the style of its lettering, researchers have dated the newly discovered excerpt to the third century A.D. at the latest. They believe it is likely the oldest inscribed section of the Odyssey ever found in Greece.

The inscription consists of the first 13 verses of the poem’s fourteenth book, in which Odysseus finally returns home to Ithaca, where he is reunited with his trusted swineherd, Eumaeus. “I think the brick was inscribed at some point, and later it was used for construction,” says Erofili-Iris Kolia, director of the Ephorate of Antiquities of Ilia. Kolia adds that, in her opinion, the inscription was originally commissioned by a landowner in Olympia who fancied himself a latter-day Odysseus.

But Odysseus went up from the harbor by the rough path up over the woodland and through the heights to the place where Athena had showed him that he would find the noble swineherd, who cared for his property above all the slaves that noble Odysseus had acquired.

He found him sitting in front of his house, where his court was built high in a place with a wide view, a beautiful great court with an open space around it. This the swineherd had himself built for the swine of his master that was gone, without the knowledge of his mistress and the old man Laertes. With huge stones he had built it, and set on it a coping of thorn. Without, he had driven stakes the whole length, this way and that, huge stakes…