Modern conveniences such as electricity, running water, and telephone lines that were hallmarks of post–World War II development across Ireland never arrived on the island of Inishark, which lies around five miles off the coast of Connemara in County Galway. The island’s rugged community of fishermen and farmers, which reached a peak population of about 300 in the nineteenth century, had dwindled to a handful of residents by the 1950s. Access to food, medicine, and other provisions was unpredictable. Storms could render the island completely isolated for days or even weeks, and young people moved away hoping to find work elsewhere. The last 24 inhabitants of the island departed in 1960. In addition to the abandoned main village, which was occupied between the eighteenth and twentieth centuries, the island features a number of sites associated with a monastery founded by the island’s patron saint, Leo of Inishark, in the seventh century. Visitors can see the remnants of several early medieval structures, including the ruins of a rectangular church, a holy well, stone altars, and a possible burial monument called a leaba. Another partially preserved structure, a beehive-shaped hut called a clochán, was traditionally believed by islanders to have been the residence of Leo himself. Historian Tommy Burke, a native of the neighboring island of Inishbofin and a member of the University of Notre Dame’s Cultural Landscapes of the Irish Coast project, says that the residents of Inishark continued to incorporate remnants of the island’s monastery landscape into their worship until they left for good. “People completed stations or ritual circuits in which they would visit the clochán and other holy sites,” he says. “They were able to inhabit two worlds at once, interacting with Inishark as a spiritual place—just as early medieval pilgrims had done—while also living very difficult secular lives on the island.”

Inishark is only accessible by boat. Visitors can take a ferry from the mainland town of Cleggan to the island of Inishbofin and then, weather permitting, hire a guide to take them on to Inishark. At just over a mile from east to west and less than a mile from north to south, the island is easily walkable for those who are sure of foot and able to navigate its hilly topography. Burke offers walking tours and recommends visiting Inishark with a guide who can point out the medieval and Bronze Age sites just a short trek from the abandoned main village. 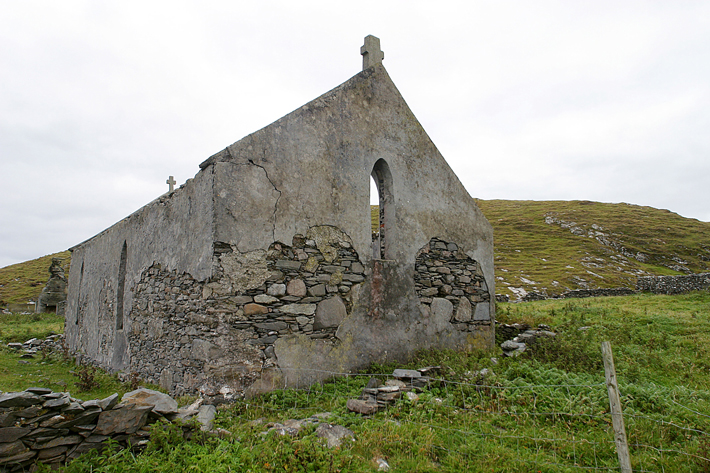 A striking cathedral, a lively student culture, and an illustrious literary heritage have made nearby Galway one of the most popular tourist destinations in Ireland. Walk around the historic center, have a pint in one of the city’s bustling pubs, and take in some traditional Irish music, for which the Connemara region is famed.