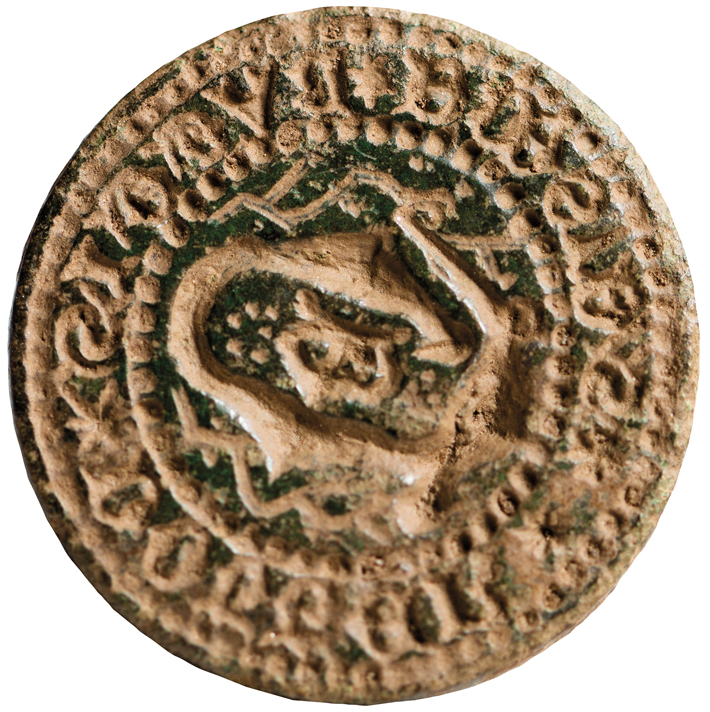 Being able to connect an archaeological artifact with a specific person mentioned in historical sources is relatively unusual—when the person was a woman, it is even more so. This recently discovered medieval seal stamp bears the name of Elisabeth Buggesdatter, a woman of high social status who was well known in medieval Denmark. Her name is written in Old Danish and surrounds what appears to be a decorative monogram. Elisabeth’s father, Sir Niels Bugge of Hald, was one of Jutland’s wealthiest men, and her husband was an influential German nobleman named Godskalk Skarpenberg. Bugge led an unsuccessful revolt against the Danish king Valdemar IV Atterdag (r. 1340–1375) in 1358. For centuries after his murder at the hands of the king’s henchmen, Bugge was celebrated as a national hero in song and verse.

Elisabeth was a powerful woman in her own right, who, like other influential women of her social class, is recorded as having spoken at the Thing, medieval Denmark’s governing assembly. Notably, says Marie Laursen, a curator at the National Museum of Denmark, where the seal is being studied, Elisabeth chose to call herself “Buggesdatter” or “daughter of Bugge,” after her father’s family name, instead of the more usual “Nielsdatter” or “daughter of Niels.” “I think this was definitely an issue of branding and wanting to be closely associated with her father,” says Laursen. Elisabeth is also known to have bought and sold several estates, for which she needed a personal seal to certify the necessary legal documents. Because these seals were so important, they were usually buried with the person upon their death. Losing one’s seal, says Laursen, “could have led to fraud, or even a kind of identity theft.” She thinks Elisabeth must have dropped hers accidentally where it was found.