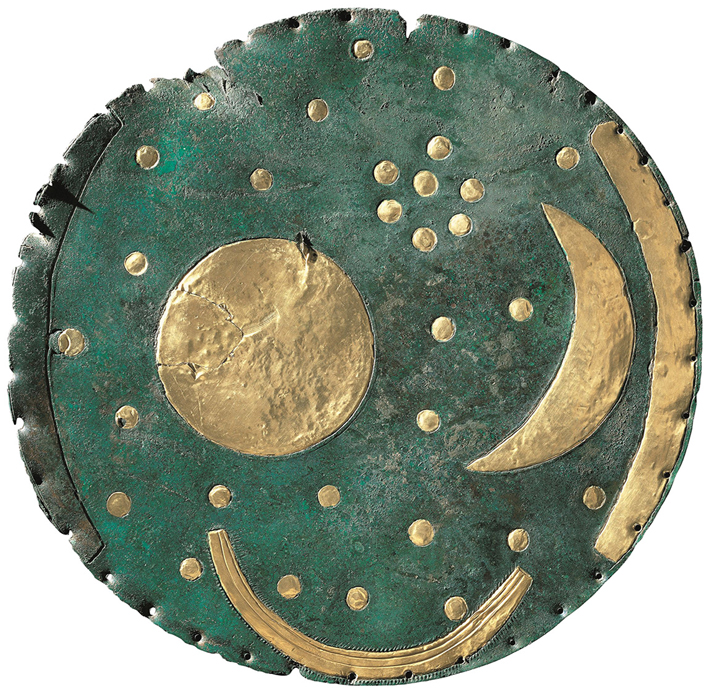 When the Nebra Sky Disc was buried, it had already been in use for 200 years. While its raw materials were imported from as far away as Cornwall, the knowledge required to create the object was entirely local, drawn from observing the heavens from atop Mittelberg, a mountain near the modern village of Nebra. The bronze disc—the world’s oldest representation of a specific astronomical phenomenon—had five phases over its history. In the first phase, the disc showed the night sky with 32 gold stars, including the Pleiades, a gold orb representing the sun or a full moon, and a crescent moon. It served as a reminder of when it was necessary to synchronize the lunar and solar years by inserting a leap month. This phenomenon occurred when the three-and-a-half-day-old moon—the crescent moon on the disc—was visible at the same time as the Pleiades. “The astronomical rules that are depicted wouldn’t be imaginable without decades of intensive observation,” says Harald Meller, director of the State Museum for Prehistory in Halle. “Until the Sky Disc was discovered, no one thought prehistoric people capable of such precise astronomical knowledge.”

Artisans next added two golden arcs to the sides of the disc, hiding two original stars. The arcs, one of which was later removed, show the horizons as seen from Mittelberg on the summer and winter solstices. At some unknown time, a stylized ship was affixed at the bottom as an allegorical symbol of the sun’s journey across the sky. “One of the most fascinating aspects of the Sky Disc is that its first two phases show the results of pure observation, astronomical knowledge without any religious or mythological implications,” says Meller. “It’s only in the third phase that these aspects, represented by the ship, are added.” Next, holes were bored around the disc’s edge, probably to attach it to a pole to be carried as a standard. Finally, in around 1600 B.C., the disc, perhaps no longer of either scientific or religious use, was buried, likely as an offering to the gods. 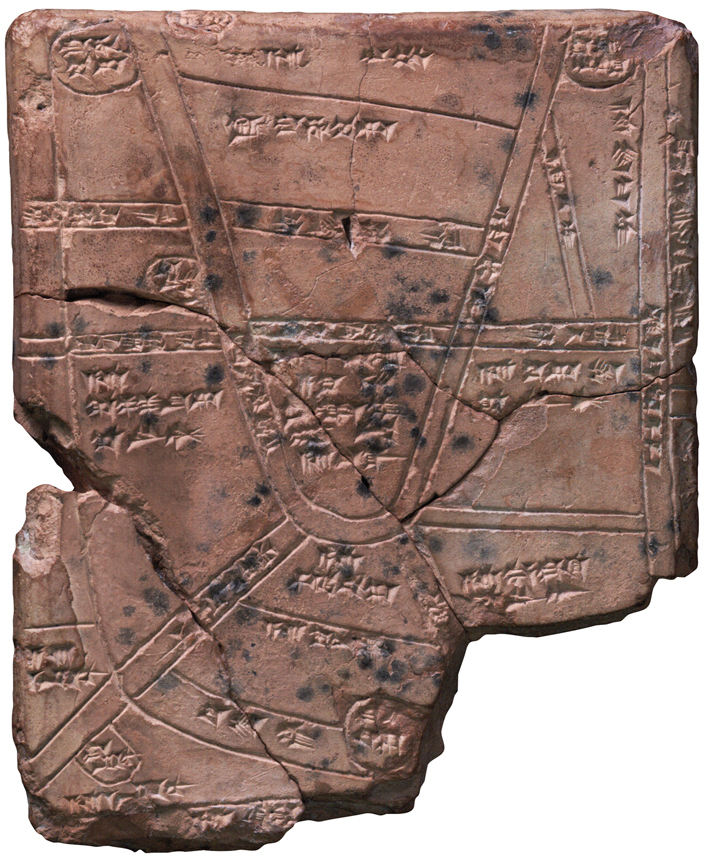 For the busy farmers of the Babylonian sacred city of Nippur, ready access to water was essential. It’s hardly surprising, then, that this tablet, which maps an area near the city, features a complex irrigation network of ditches and canals, depicted by lines, along with a number of towns and agricultural estates, represented by circles. What is somewhat surprising, though, is that a map of the area was produced at all. Landholdings in Mesopotamia were typically described rather than drawn, explains Philip Jones, a curator at the Penn Museum. “It’s difficult to put your finger on why this map was created,” he says, “but it must have been for some administrative purpose.”

The map’s central section, identified in cuneiform writing as a “field of the palace,” suggests that the tablet served as a guide to estates belonging to the recently established Kassite Dynasty, which was based in the city of Babylon, around 70 miles northwest of Nippur. At this time, the region’s new Kassite rulers were challenging the religious establishment in Nippur, which had long been the seat of the chief Sumerian god, Enlil. The top center section of the tablet includes an estate and field of Marduk, the patron god of Babylon. Says Jones, “What we see here is that Marduk is beginning to usurp Enlil’s place and is actually getting land within Enlil’s own city.” 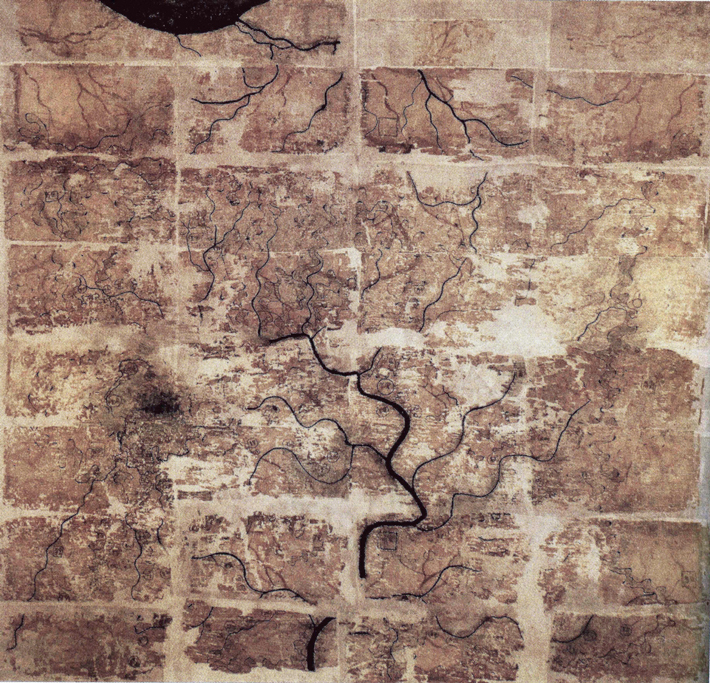 In 168 B.C., a lacquer box containing three maps drawn on silk was placed in the tomb of a Han Dynasty general at the site of Mawangdui in southeastern China’s Hunan Province. The general was most likely the son of Li Cang, the ruler of the Changsha Kingdom—a fiefdom of the Han Empire—whose own well-appointed tomb lay nearby.

Each map presents a section of the Changsha Kingdom. One map, now largely in tatters and difficult to read, seems to show a city or mausoleum. Another focuses on the locations of military garrisons in a region that lay near Changsha’s frontier with a fractious neighboring kingdom. The third map, shown here, illustrates the mountains, rivers, and important settlements of the southern half of Changsha.

The Mawangdui maps demonstrate a high degree of standardization, especially in their use of abstract signs, such as squares to symbolize cities, says Cordell Yee, a cartographic historian at St. John’s College in Annapolis. He points out that the maps are so sophisticated that they were likely produced according to long-established cartographic traditions. “This suggests mapmaking was already well developed in China by this time,” says Yee. The maps were undoubtedly indispensable for administrative and military planning purposes, but they may also have been enjoyed as works of art. Next to depictions of a prominent mountain range, the Jiuyi Shan, or Nine Beguiling Mountains, the dark area at the far left, the mapmaker carefully drew in shadowy images that may depict the reflection of the peaks in a nearby lake.

The world’s oldest known geological map is a nine-foot-long papyrus from the Egyptian village of Deir el-Medina, home to the New Kingdom craftsmen who worked in the Valley of the Kings. Created by Amennakhte, the chief scribe of the royal necropolis, the papyrus depicts a dry riverbed called the Wadi Hammamat in Egypt’s eastern desert. The wadi had been used for quarrying and mining for centuries, and as a route connecting the Nile Valley to the Red Sea for millennia. No map would have been needed for general travel, according to Egyptologist Andreas Dorn of Uppsala University and linguist Stéphane Polis of the University of Liège. Instead, the papyrus was created as a commemorative record of a pharaonic expedition, perhaps during the reign of Ramesses IV (r. ca. 1153–1147 B.C.), to a bekhen-stone quarry. Bekhen-stone, or greywacke, was prized for use in high-quality sculptures. To distinguish types of stone, Amennakhte employed dark brown to represent bekhen-stone, pink for deposits of granite and gold, and spots for alluvial deposits.

The scribe also included quarried bekhen-stone blocks with their measurements, as well as roads and directions in hieroglyphs, such as “road leading to the sea.” Amennakhte also drew natural and built landmarks including small trees, bushes, and a well, along with a monument to Seti I (r. ca. 1294–1279 B.C.) and a temple to the god Amun, both illustrated in white at the far left. “Amennakhte definitely had experience visualizing complex structures, as he was also responsible for drawing tombs. He was able to represent topographical information by flattening out such things as roads and the natural environment,” says Polis. “This unique document mixes geographical and geological information in a way that anticipates many of our modern mapmaking practices.” 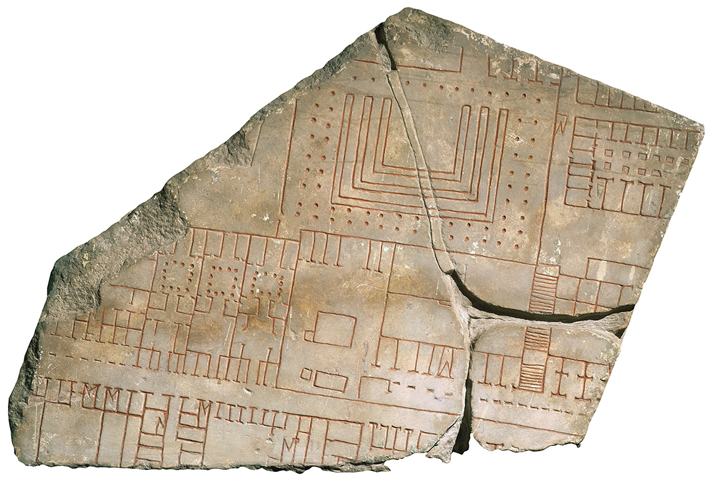