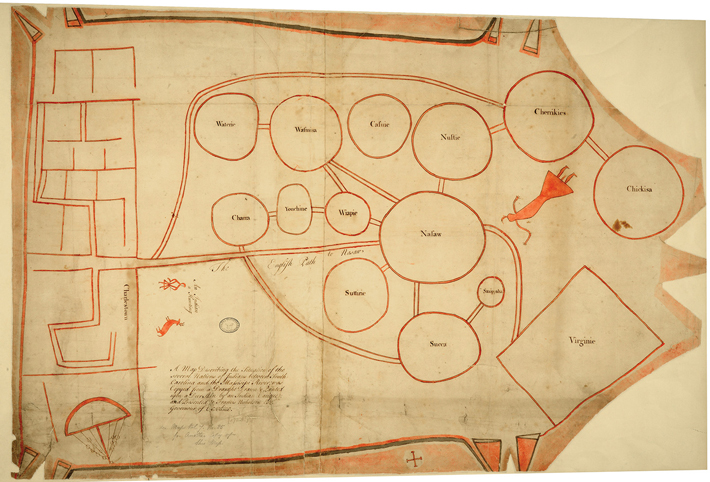 Soon after arriving in Charleston, Francis Nicholson, the newly installed royal governor of South Carolina, received a deerskin map thought to have been drawn by an Indian “cacique,” or chief. Nicholson ordered a paper copy of the map, which represents 13 native groups as circles connected with lines. It remains a rare example of indigenous North American cartography from the colonial period.

Archaeologist Gregory Waselkov of the University of South Alabama believes that the mapmaker was probably a member of the Catawba people—who still call South Carolina home—as the Catawba community of Nasaw occupies the central position. European settlements, including Charleston and Virginia, are portrayed by squares, which Waselkov thinks was not only a way of differentiating the English as foreigners, but may have constituted a native critique of European rigidity. The circles and squares vary in size, likely in proportion to the importance accorded the communities by the mapmaker. The connecting lines illustrate social and political relationships among people throughout the South Carolina Piedmont and the greater Southeast. “Archaeologists are often reluctant to make assumptions about peoples’ knowledge of their neighbors without the presence of artifacts,” Waselkov says. “But this map is further evidence that native people were aware of things far from their own hearths.”