More than a decade ago, archaeologists Andrew Chamberlain of the University of Manchester and Mike Parker Pearson of University College London began taking measurements at Stonehenge as part of their research at the site. They determined that the Neolithic monument’s earthwork elements—including a ditch, a bank, and a ring of chalk pits—which form concentric circles around the iconic standing stones, all feature diameters evenly divisible by a single standard measurement, that is to say, with no fractions remaining. They termed this measurement the “long foot,” because it is equal to 1.056 modern feet. Chamberlain and Parker Pearson found that the distances between some of Stonehenge’s megaliths could also be expressed as whole numbers of long feet. This led them to question how Stonehenge’s builders had made the calculations necessary to build such a complex monument intended, at least in part, to track the movements of the sun and moon, and to ask what, exactly, were the builders using to take those measurements. Although they didn’t know it at the time, the answer appears to lie in a group of puzzling Neolithic objects.

The four artifacts are known as the Folkton Drums and the Lavant Drum: three intricately carved chalk cylinders found in a child’s grave in Folkton, East Yorkshire, in 1889, and one unearthed in a pit in Lavant, West Sussex, in 1993. For more than a century, the Folkton Drums have been regarded as some of the most celebrated examples of Neolithic art in Britain. Although scholars immediately recognized the Lavant Drum’s similarity to the Folkton Drums, no one knew what any of the artifacts had been used for 4,500 years ago. 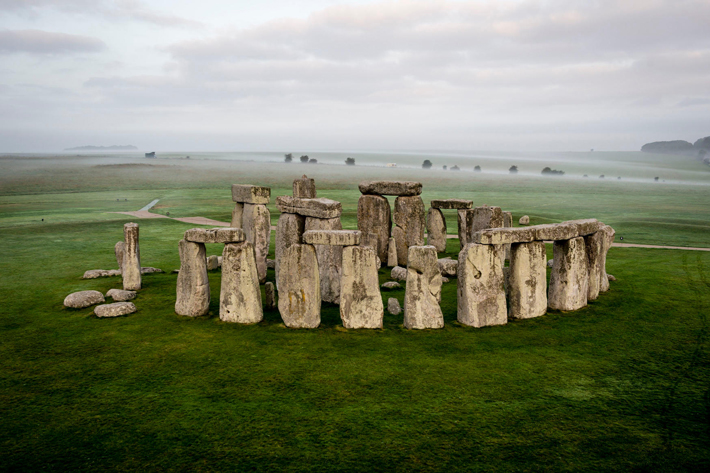 In 2016, archaeologist Anne Teather, also of the University of Manchester, was researching all four drums when she realized that the smallest of the Folkton Drums had a circumference that appeared to equal one long foot. When Teather, together with Chamberlain, considered the circumferences of the other three drums, they noticed a stunning mathematical relationship—the drums’ dimensions appeared to advance in a regular progression. To test their theory, they wrapped a cord measuring 10 long feet around a wooden model of the smallest Folkton Drum and found that it wound around exactly 10 times. They then calculated that the same length of cord would wrap around the next largest drum—the Lavant Drum—exactly nine times. Around the remaining two Folkton Drums, the cord would wrap exactly eight and seven times. Thus, they suggested, the drums, which are themselves ancient replicas of objects that would originally have been fashioned of wood, could have been used to make a sort of Neolithic tape measure. Further, they established that at least one standard measure had been used in Neolithic Britain—and even at Stonehenge itself. “We absolutely didn’t try to marry some of the most enigmatic artifacts in Britain to its most enigmatic monument,” says Teather. “The evidence led us to that.”

A standard measurement would have also been useful, says Chamberlain, because it is well known that many of Stonehenge’s stones were quarried 100 miles away in what is now western Wales. It’s possible that Stonehenge’s builders or their emissaries communicated specifications to the quarries using this standard measurement. “Anyone who’s done any construction will know that if you get a piece of lumber and it’s too short, there’s not a lot you can do about it,” Chamberlain says. Instead of hauling stones to the construction site and trimming them on location, it now seems more likely that the megaliths were cut to order. “The drums show that it was possible to take that standard to the place where you’re quarrying to make sure the stones you’re getting are the right size,” Chamberlain explains. “That standard could then be shared with the community.”