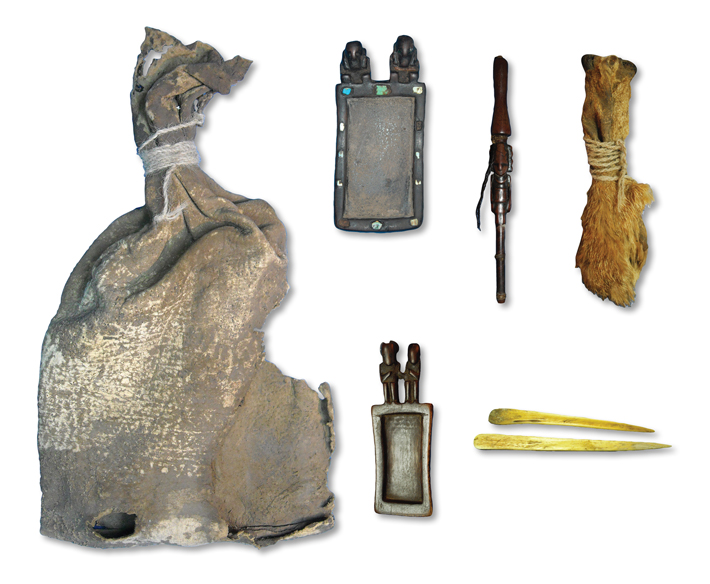 A 1,000-year-old bundle of drug paraphernalia discovered in southwest Bolivia has been found to contain a truly impressive array of psychotropic substances. On the items in the bundle, researchers have identified traces of tobacco, coca, the raw materials of a psychoactive snuff called vilca or cebil, and Banisteriopsis caapi, which is used to prepare the concoction known as ayahuasca. The bundle, which was retrieved from a cave in 2010, included an anthropomorphic snuff tube with attached braids of human hair, a large leather bag holding two carved wooden snuff tablets, camelid-bone spatulas, and a pouch made of three stitched-together fox snouts. The leather bag has been radiocarbon dated to between A.D. 905 and 1170. During this time, the Tiwanaku culture, which dominated much of the southern and central Andes from the fifth through eleventh centuries, declined and eventually collapsed. “We know that during the Tiwanaku period, the consumption of hallucinogens was an important component of the religious system,” says Penn State University archaeologist José Capriles. Plant material identified on the objects came from a variety of ecosystems, Capriles says, and was likely gathered by shamans who traveled long distances and tapped into far-reaching exchange networks to access specialized plant species and accumulate knowledge of varied preparations.