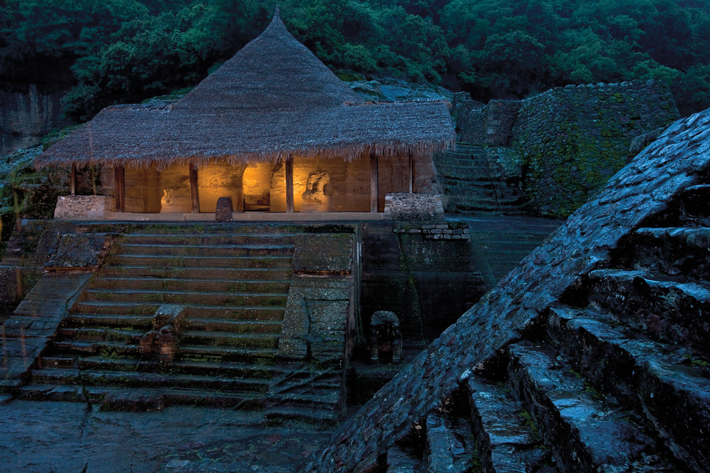 The town of Malinalco, just over two hours southwest of Mexico City by car, is home to two historic sites that may seem to represent distinct worlds. The first is a complex built by the Aztecs between 1476, when they conquered the region, and 1519, when the Spanish arrived. The complex’s main temple, named Cuauhcalli, or “House of the Eagles,” was built directly into a hillside. It is the only example of such rock-cut architecture in the Aztec world, and one of only a handful in the Americas.

The other site is the Augustinian monastery of San Cristobál, now called Divino Salvador, which was built in 1540 and is still in use today. The monastery features vivid murals of biblical scenes that were painted by subjugated Aztecs shortly after its founding. Art historian Manuel Aguilar-Moreno of California State University, Los Angeles, says that native people wove traditional Aztec religious and cosmological beliefs into this artwork. “Many aspects of Aztec religion have parallels in Christianity,” he says, “and one such parallel is expressed at both the monastery and Cuauhcalli.” Iconography at the temple suggests that it was dedicated to the Aztec sun god, Huitzilopochtli, who is often depicted as an eagle and was said to have been born to a virgin mother. 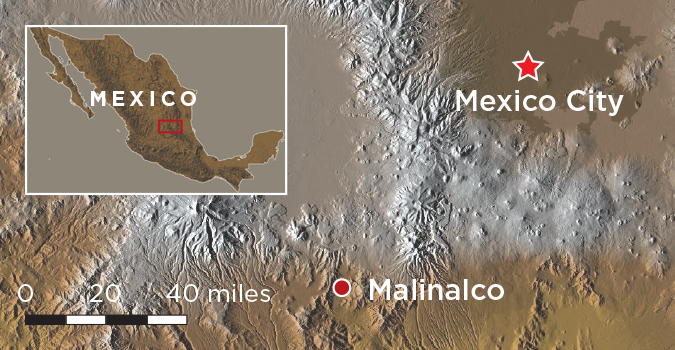 Begin your Malinalco experience by climbing up a hill known as the Cerro de los Idolos to reach the Aztec ruins 700 feet above the town. Cuauhcalli stands atop a pyramid platform and is guarded by now-headless statues of jaguars. The temple’s doorway was designed to mimic a serpent’s open mouth. Its interior features motifs, carvings, and animal-shaped thrones, all of which served as avatars for gods. The thrones were also the setting for rituals involving the Aztec eagle and jaguar warriors. In the center of the temple, an eagle sculpture faces the doorway, which Aguilar-Moreno says represents Huitzilopochtli emerging into the world to lead the conquering Aztecs to the promised land. He recommends spending a few hours taking this all in before returning to town to see the monastery. There, a mural of the Garden of Eden—the concept of an earthly paradise was shared by the Aztecs and the Spanish friars—is resplendent with local Mexican animals and plants.

Though it boasts a burgeoning restaurant and boutique hotel scene, Malinalco has retained its traditional sixteenth-century layout, and residents still identify strongly with their own barrios. Between meals, be sure to visit the various barrio chapels, each of which is dedicated to its own patron saint.