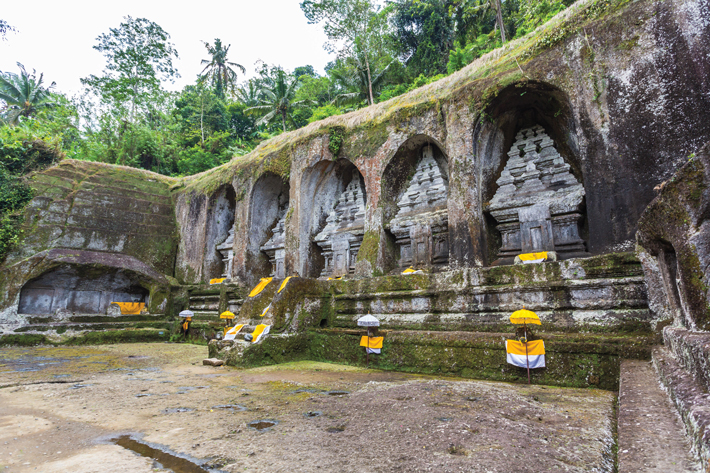 Some 1,000 years ago, stonemasons cut into a basalt escarpment in a river valley outside the modern Balinese village of Tampaksiring. They carved out a nearly 100-foot-wide courtyard backed by a 40-foot-tall vertical wall. Into this wall they carved five shrines, called candis, each almost 30 feet tall and intended to resemble temple facades. Across the small river bisecting the valley, the masons carved another courtyard and four more, slightly smaller, candis. A tenth candi is set apart from the others. The two courtyards and the candis, as well as a number of small artificial caves that may once have been used as prayer or living spaces for monks, make up the site of Gunung Kawi. This is one of many temple complexes built on Java and Bali starting around the first century A.D., when Hinduism and then Buddhism began to come to Indonesia from the Indian subcontinent. The Gunung Kawi complex was likely built to memorialize the Balinese ruler Anak Wungsu, who died around A.D. 1077. The smaller candis are thought to commemorate Wungsu’s children, wives, and concubines. “Multiple queens or children get a monument that’s 95 percent the size of the monument to the king,” says archaeologist John Schoenfelder of the University of Massachusetts Boston, “so they are being categorized as nearly as important.” Schoenfelder suggests that this relative lack of hierarchy emphasizes the fact that the extended royal household was considered a single entity. At Gunung Kawi, the ruler and his kin were venerated alongside patron gods with whom they were reincorporated after death.

The entrance to Gunung Kawi is a short walk from the center of Tampaksiring and a half-hour taxi ride from the popular tourist town of Ubud. Beyond a gauntlet of souvenir stalls, a steep set of more than 300 stairs leads down into the valley. The price of admission includes the rental of a sarong and sash, which are customarily worn when visiting temples in Bali. Very little in the way of interpretive display is available at the site, so you may wish to inquire with local tour agencies or at your hotel about hiring a guide.

Gunung Kawi, as well as nearby Tirta Empul, a water temple just half a mile north that has been visited for centuries by pilgrims seeking ritual purification, is nestled within an ancient landscape of rice terraces and irrigation canals. Between temple visits, sign up for a walking tour along one of the various pathways in the Ubud area to witness firsthand the inextricable connection—both physical and symbolic—between Balinese agriculture and religious life.