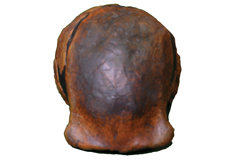 INDONESIA: Homo erectus, believed to have been a direct ancestor of modern humans, walked out of Africa almost 2 million years ago and spread across Asia before beginning to disappear around 400,000 years ago. New research has shown that the last place the hominins survived was on the island of Java. A team used new technology on previously excavated remains to confirm that 12 H. erectus skulls from Ngandong were between 117,000 and 108,000 years old, making them the last known members of their species.