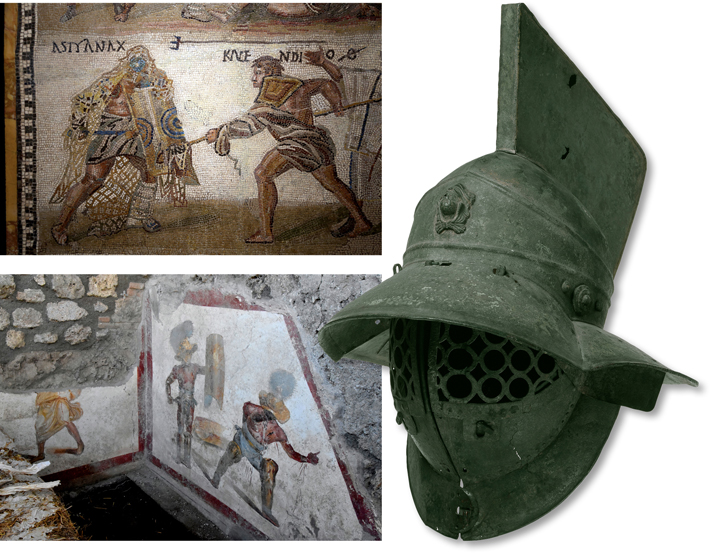 Gladiatorial contests were wildly popular among the ancient Romans, drawing tens of thousands of spectators. At first, the bouts were simple affairs, fought between combatants lightly armed with swords or spears. But as these events grew more popular and involved a greater number of fighting pairs, the Romans boosted their entertainment value by pitting gladiators who specialized in different sets of weapons, armor, and fighting style against each other. This increased the unpredictability of a match’s outcome. For example, a secutor carried a short sword and a large shield and wore a rounded helmet that covered his entire head, except for two small eyeholes. A secutor often opposed a retiarius, who was equipped with a net in one hand and a long trident in the other. Other classes of gladiators included the dimachaerii, who carried two short curved blades; the equites, who fought on horseback; the essedarii, who rode chariots; and the laqueatores, who stalked their opponents with lassos and daggers.

While some ancient written sources describe these various types of gladiator, mosaics and frescoes capture their appearance. One such fresco was recently unearthed in a tavern in Pompeii. The vivid scene depicts two gladiators—a murmillo (“fish-man”) and a Traex (“Thracian”). The murmillo is recognizable by his visored helmet, right arm guard, left shin guard, large rectangular shield, and short sword. The Traex wore a similar wide-brimmed crested helmet, but carried a smaller shield and a short curved sword. He is portrayed wearing a characteristic protective belt and thigh-high greaves. In the Pompeian fresco, at least, the murmillo clearly has the edge—he is depicted triumphantly holding up his shield while blood gushes from wounds to his opponent’s wrist and chest.