In the ruins of Xanadu, the summer capital of the Mongol emperor Kublai Khan (r. A.D. 1260–1294), Chinese archaeologists unearthed one of the world’s earliest surviving guns. Measuring just 14 inches long, the bronze hand cannon was stamped with a serial number and a date corresponding to A.D. 1298. The small cannon was fashioned by Chinese artisans who benefited from working in a tradition of gunpowder weaponry that was already at least 400 years old. Some time just before the rise of China’s Song Dynasty (A.D. 960–1279), alchemists in search of new medicines found that, by combining nitrates such as saltpeter with sulfur and charcoal, they could create a chemical explosive. The Chinese word for gunpowder means “fire medicine,” but Song Dynasty officials were soon using the compound to construct simple explosives such as fire arrows and, in time, bombs. “People often think Europeans were the first to understand the military implications of gunpowder,” says Emory University historian Tonio Andrade. “But the Chinese understood gunpowder’s potential very early on.” By A.D. 1150, Song soldiers were using bamboo and wood proto-guns known as fire lances that were essentially flamethrowers.

Historians have long regarded the Song Dynasty as militarily weak because the nomadic Liao, Jin, and Western Xia Dynasties encroached on its territory before it finally fell to the Mongols in A.D. 1279. Andrade points out that, in this turbulent period, these confrontations likely spurred rapid innovations in gunpowder warfare, leading to the creation of weapons that might be recognized today as guns. “What a gun looked like then is blurry by our standards,” he says. “Even the Xanadu gun may have been more like a fire lance than what we think of as a gun.” 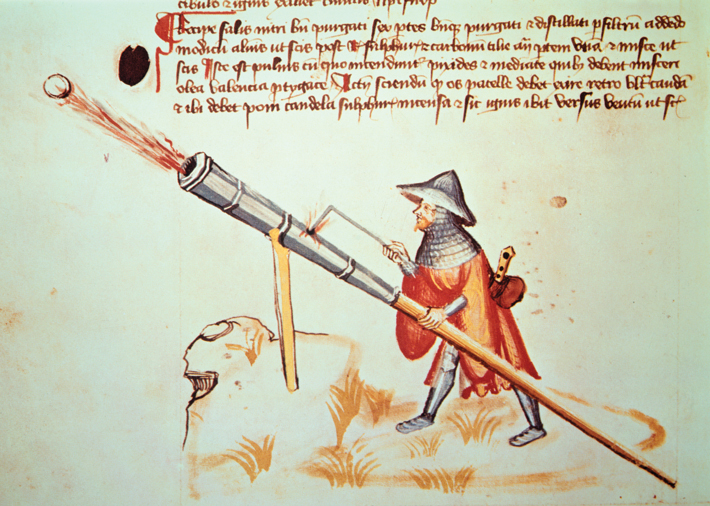 Two early metal cannons that seem to have functioned as guns have been unearthed in China’s northwestern Gansu Province, the domain of the Western Xia (A.D. 1038–1227). They bear no inscriptions, but based on the area where they were excavated, they may date to the early thirteenth century A.D. One cannon was even discovered with an iron ball and a measure of gunpowder still in its barrel. By A.D. 1227, the Mongols overwhelmed the Western Xia and went on to embrace gunpowder warfare. Guns spread throughout Asia in the wake of the Mongol conquests, reaching Europe by A.D. 1326. That year, the first known European illustration of a cannon appeared in a Latin treatise on the proper behavior of kings.