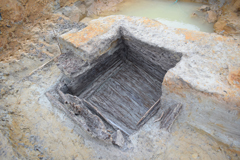 CZECH REPUBLIC: Part of an early Neolithic well was uncovered during road construction in East Bohemia near the town of Ostrov. Researchers were impressed by the quality of its timber framing, especially given the fact that it was built and shaped using only stone or bone tools. Tree-ring dating has indicated that the trees used for the well’s construction were felled in 5256 or 5255 B.C., making it the oldest wooden architectural structure ever discovered in Europe.