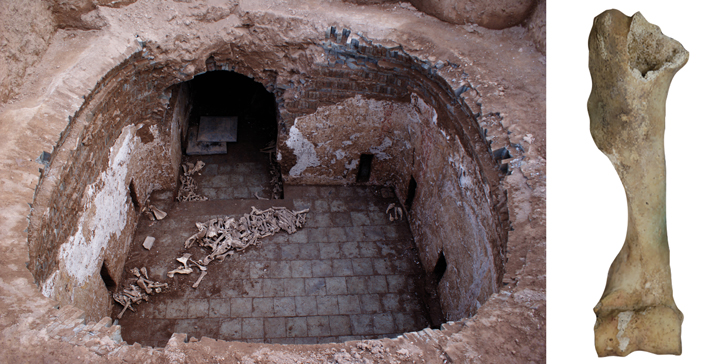 Remains of three small donkeys unearthed in a noblewoman’s tomb in the ancient Chinese capital of Chang’an might provide the first archaeological evidence of the game lvju, or donkey polo. According to Tang Dynasty (A.D. 618–906) historical texts, the sport was a favorite pastime of elite women and older members of the imperial court, providing a safer alternative to the dangerous, often fatal, version played on horseback. The sacrifice of these donkeys seems to have been a rare event carried out in honor of the deceased, a woman named Cui Shi who died in A.D. 878 at the age of 59. Her husband, Bao Gao, was a provincial governor whose horse polo–playing prowess earned him a promotion—and cost him an eye.

Biomechanical analysis of the donkey bones by a Chinese-American research team has shown that the animals experienced unusual patterns of locomotion, such as rapid acceleration and deceleration, that could be consistent with playing polo, explains anthropologist Fiona Marshall of Washington University in St. Louis. Whether or not these were Cui Shi’s actual polo donkeys, they may have been buried with her, along with a lead stirrup, to enable her to continue to play the game in the afterlife.