Many people in the port town of Folkestone in southeastern England still revere Saint Eanswythe, a seventh-century Anglo-Saxon princess who helped found Folkestone Priory, the first nunnery in England. Her remains were thought to have been interred at the priory until the 1530s, but went missing after Henry VIII dissolved the country’s monasteries. In 1885, a lead container with human bones was discovered concealed in a wall near the priory’s altar. It was long assumed the relics were Saint Eanswythe’s, and that they had been hidden to protect them from the Tudor king’s machinations. Now, work on the reliquary led by Canterbury Archaeological Trust archaeologist Andrew Richardson has provided new evidence that the remains are in fact those of the missing holy woman.

The team’s study shows that the container dates to around the eighth century, and that the remains belonged to a young woman of about 20 years old who lived in the mid-seventh century. Says Richardson, “The strong probability is that this young person, concealed in a prestigious location within a church known to have housed her remains, is indeed Eanswythe.” 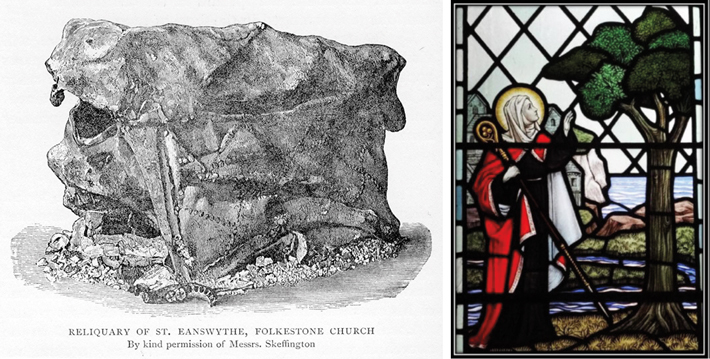