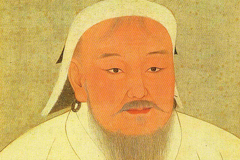 MONGOLIA: During his life, Genghis Khan was often on the move, launching invasions and conquering territory across Eurasia. In the 13th century, he founded the Mongol Empire, which eventually stretched from the Pacific Ocean to Eastern Europe. However, between campaigns, Genghis and his army would return to his winter camp, or ordu, whose location has been debated for decades. New research at the site of Avraga in eastern Mongolia now links it with the khan’s lifetime, suggesting it was likely the site of his off-season headquarters.