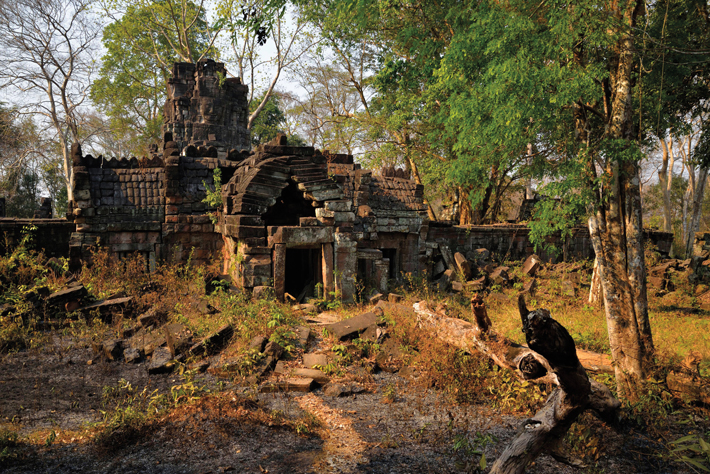 Though it is perhaps the most heavily looted archaeological site in Cambodia, the vast settlement of Preah Khan of Kompong Svay still beguiles archaeologists and tourists with its size and beauty. Some 50 miles east of Angkor—the capital of the Khmer Empire, which spanned much of mainland Southeast Asia between the ninth and fifteenth centuries A.D.—Preah Khan is believed to have served as an important Buddhist pilgrimage center and a wealthy way station for the raw materials that fueled the empire’s expansion. First built in the eleventh century, the site consists of four concentric enclosure walls that surround several temples made of brick, laterite, and sandstone. “Preah Khan is an enigma because it is the single largest construction ever built by the Khmer,” says archaeologist Mitch Hendrickson of the University of Illinois at Chicago. “It’s even bigger than the complex of Angkor Thom inside Angkor itself.”

Though many artifacts and reliefs were stolen from Preah Khan in the 1970s and 1980s, the archaeological materials that do survive suggest the site may have been nearly as wealthy as Angkor. For decades, researchers have pointed to slag piles and possible furnace locations as evidence that Preah Khan was a center of iron production. However, Hendrickson and his colleagues have dated samples taken from multiple locations at the site and determined that smelting activities took place there starting only in the early fifteenth century. Hendrickson notes that Preah Khan was located roughly 20 miles from Phnom Dek, Cambodia’s largest source of iron oxide, an essential component in the smelting process. This positioned the settlement at its peak to act as a conduit between iron smelters based at Phnom Dek—who were members of an ethnic minority called the Kuay—and the metropolis at Angkor. “Part of the reason Preah Khan managed to reach the wealth that it had,” Hendrickson explains, “was that it served as a mediator for the production of iron between these two locations.” 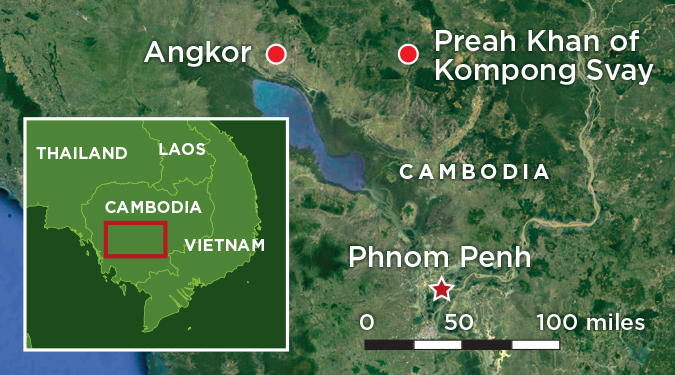 The journey to Preah Khan takes four hours by car from the town of Siem Reap and the Angkor ruins. Four-wheel drive is advisable. Hendrickson recommends hiring a guide to help find Preah Khan’s most impressive structures, including the island temple of Preah Thkol at the center of the site’s reservoir, and Preah Chatumukh, a tower depicting a standing Buddha.

Despite the grandeur of Preah Khan, the site’s remote location means you will likely be one of only a handful of visitors on any given day. Bring binoculars to catch sight of the many species of local birds or take a book and enjoy the solitude.