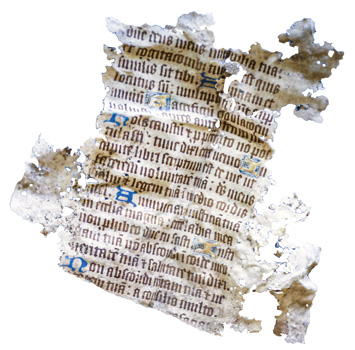 From the mid-fifteenth to the mid-sixteenth century, the Bedingfelds were a wealthy, prominent family with a splendid country house called Oxburgh Hall in Oxborough, Norfolk, and substantial influence in England’s royal court. Their station was only enhanced when Mary I (r. 1553–1558) became queen—like their new monarch, the Bedingfelds were devout Catholics. In addition to public worship in the parish church, family members would also have worshipped in private, using such accompaniments as a Book of Hours filled with prayer cycles, many of which were dedicated to the Virgin Mary. Other prayers were dedicated to remembrance of the dead. 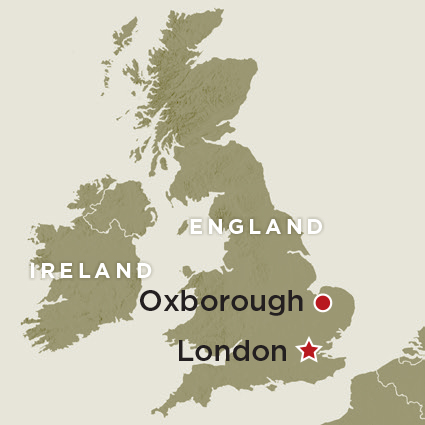 This page, likely from a Book of Hours, was fortuitously discovered among rubble in the eaves during restoration of Oxburgh’s roof. It displays Psalm 39 from the Latin Bible. “This single page represents the family’s approach to devotional practice,” says National Trust curator Anna Forrest. “The vibrant illuminated initials in azurite blue and gold leaf in place of the more standard blue and red indicates that the book must have been quite expensive, and thus also represents the family’s wealth and prestige. Books of Hours were very important in the later Middle Ages and were often handed down through families.”

The Bedingfelds’ financial state and political standing were both threatened when Elizabeth I became queen in 1558. Unlike Mary, Elizabeth was a Protestant, and the Bedingfelds refused to abide by the Act of Uniformity, which outlawed Mass. “From that point on, they were recusants whose refusal to attend the services of the Church of England was a statutory offense,” explains Forrest. The family would have been forced to shelter at Oxburgh and worship in secret, perhaps using the Book of Hours to which this page belonged.