Grave of the “Griffin Warrior” 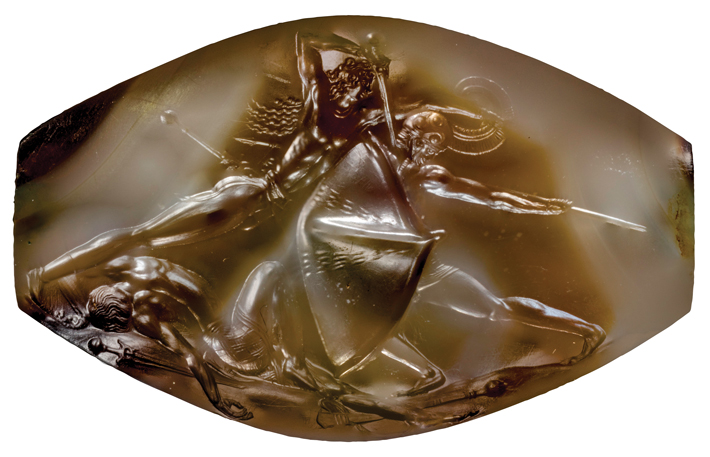 One of the greatest archaeological discoveries in Greece over the past 50 years was made at Pylos by University of Cincinnati archaeologists Jack Davis and Sharon Stocker. The grave of the “Griffin Warrior” held the remains of a powerful man who died around 1450 B.C. and was buried alongside 1,500 precious objects, including silver cups, bronze weapons, ivory combs, and gold rings. “The more we study the assemblage, the more amazed we are by how rare and exotic this unique group of artifacts is,” say Davis and Stocker. The most exquisite artifact is one of the smallest: a 1.4-inch-long carved almond-shaped agate sealstone depicting three warriors. Davis and Stocker believe the gem was made on Crete. “Our understanding of the closeness of the relationship between Pylos and the Minoans of Crete has grown,” they say. “As we look more closely at certain artifacts, particularly the sealstones, we realize that they were likely produced by Minoan craftsmen and display typical Minoan iconography. Other artifacts in the grave, however, are very mainland in their appearance.” To read more about the Griffin Warrior's grave, go to “World of the Griffin Warrior.”