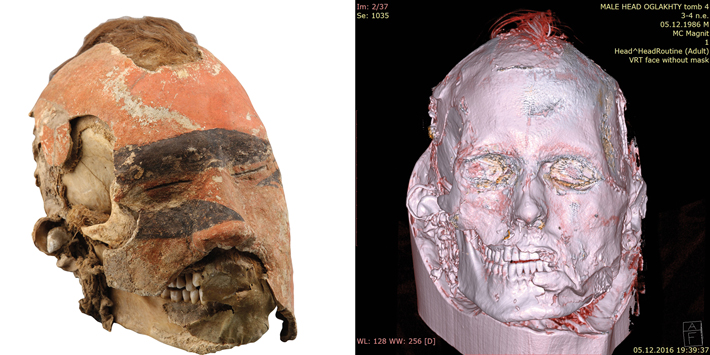 The Tashtyk culture, which existed between the first and seventh centuries A.D. in southern Siberia, is known for its elaborate burial customs, including applying layers of gypsum onto the deceased’s face to create lifelike death masks. A stunning example of this practice—the mummified remains of a man buried some 1,700 years ago wearing a painted red death mask—was discovered in the late 1960s in the Khakassia region. More than half a century later, researchers from Russia’s Hermitage Museum have finally managed to glimpse the man’s face.

Since removing the mask would damage the mummy, the researchers instead conducted a CT scan to peer beneath the facial covering. The scan revealed that the man had a nasty gash across the left side of his face, running from his eye to his ear, that had been sutured shut prior to his burial. Experts believe the wound may have been fatal, and that it was stitched up after the man died so he would not have to go to the afterlife with a disfigured appearance. The scan also showed that the man’s skull has a two-to-three-inch hole in its left temple, likely resulting from the removal of his brain during his funerary ceremony.