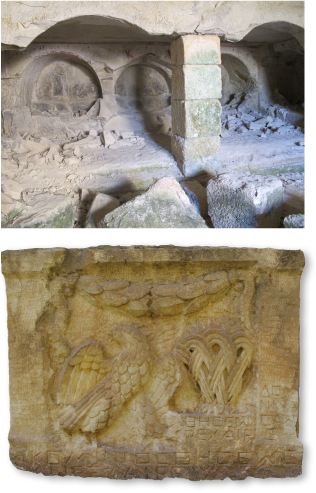 In addition to uncovering information about how Zeugma’s inhabitants lived, archaeologists also want to explore the thousands of tombs scattered around the city’s outskirts. Huseyin Yaman of Ankara University is studying the tombs’ visible architectural elements, since there has been little excavation work so far. Cut from the soft limestone landscape, the tombs come in many different shapes and sizes, a reflection of the city’s diverse residents. Some are small spaces for an individual or a few members of one family. Others are enormous chambers with altars and as many as 64 graves. Inscriptions on the walls also vary widely and use several languages to list first names, family names, ages, and professions. Some names are Latin, some Semitic, and others Greek, which, according to Yaman, shows the cosmopolitan nature of the city. Interestingly, the tombs have few human figures. In most cases there is only the image of a basket for a woman’s tomb and an eagle for a man’s (bottom left). The meaning of the unusual imagery remains unknown.