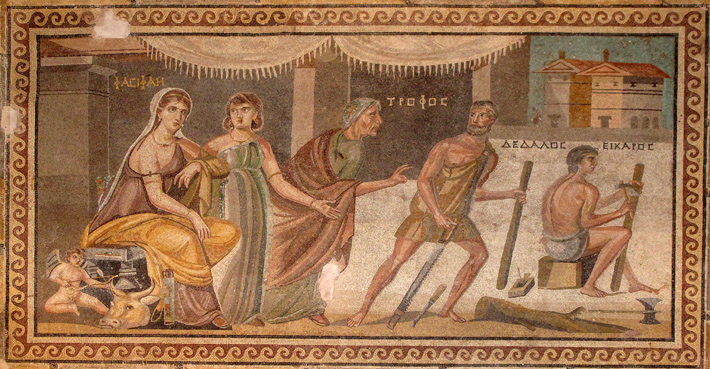 Mine Yar and Celal Kucuk, a couple who own the Istanbul-based Art Restorasyon, first came to Zeugma on May 5, 2000, as volunteers to help with emergency mosaic removals necessitated by the construction of the Birecik Dam. For the next month and a half they toiled every day, until the site was covered with water. “We were working against nature,” says Yar, recalling not only the rising water, but also the snakes and other animals heading up the hillside to escape the impending flood. “It was a very exciting time,” she adds. During this period, Yar says, at least 3,000 square feet of mosaics, about 15 complete ones in all, were removed from two Roman villas. The mosaics are now on display in the Zeugma Mosaic Museum in nearby Gaziantep. After the initial on-site work was completed, Kucuk and Yar were part of a team of dozens of conservators, archaeologists, art historians, and local mosaic masters gathered in the museum’s impressive restoration laboratory. Work on the mosaics from Zeugma is now finished, mosaics from the region are still being conserved in the laboratory, and Yar and Kucuk continue their preservation efforts on other projects. 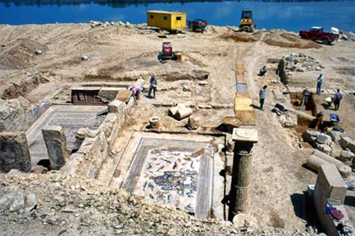 But how were the mosaics initially removed from Zeugma more than a decade ago? The team used different techniques depending on the mosaic. For mosaics with a big emblema (central figure) such as the Poseidon—the emblema alone was more than 300 square feet— they used a specially built wooden roller. To begin, the team slipped metal rods under the layer of tesserae (the small square stones from which mosaics are made). This raised the entire mosaic up from the floor. They then placed the roller, which was about nine feet long and almost four feet in diameter, on top of the mosaic and “rolled” it up like a carpet. The other technique the team used was to cut the mosaic into both big and small sections, but Kucuk says this is not the preferred method. “We didn’t want to cut them into pieces because every time you put them back together, you add to the story of the mosaic. You especially don’t want to cut the emblema,” he says. “You also need to be aware of how cutting it up will affect your ability to restore the mosaic later,” he adds.

While doing restoration work, Yar noticed that sections of tesserae had been replaced in three mosaics, one featuring the three muses, a second showing the goddess of the earth, Gaea, and a third geometric mosaic that once covered a pool. “Maybe the lady of the house wanted to redecorate,” she says. She also detected other irregularities in a geometric mosaic where stones were used irregularly to fill cracks or holes, indicating that the emblema had been changed, although what the original depicted remains unknown. During the rescue work Kucuk says the team learned about how the mosaics had been made. “We found drawings underneath the mosaics showing the ancient workers where to place the panels,” he explains. “This helped us understand that mosaic panels were not put together inside the house. Instead, they made them in the workplace and then brought the finished mosaic to the home in pieces and placed it, section by section, on the floor.”