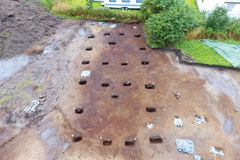 NORWAY: Prior to the construction of a housing development near Ørsta, archaeologists uncovered traces of a Viking-era temple dating to the 8th century. This “god house,” where deities such as Odin, Thor, and Freya were worshipped, is the first of its kind ever found in Norway, although examples are known from Sweden and Denmark. The building, which originally measured 45 feet long and 40 feet tall including its central tower, would have been the focus of rituals and sacrifices, particularly during the winter and summer solstices.