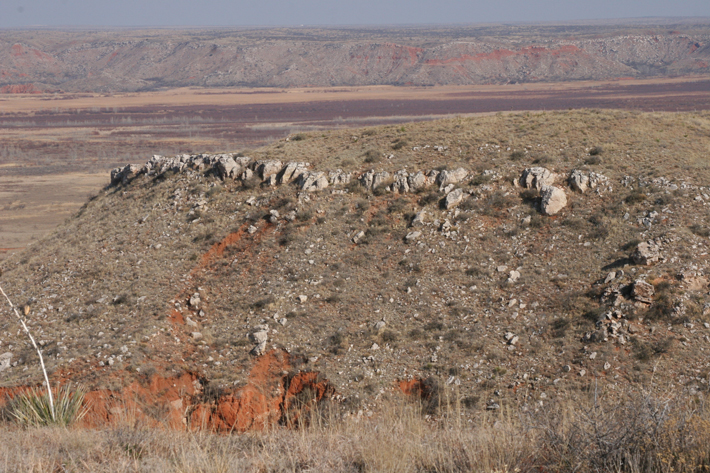 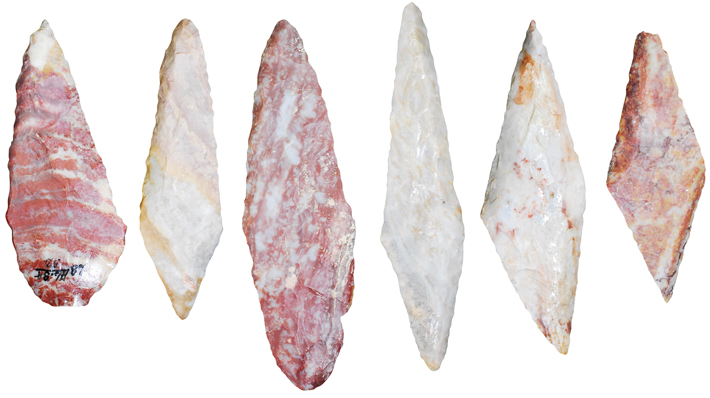 For some 13,000 years, Native people in the southern Great Plains obtained flint from an outcrop of dolomite chert that straddles the Texas Panhandle’s Canadian River. Alibates Flint Quarries National Monument, which is named after early twentieth-century rancher Allen “Allie” Bates, features an arresting landscape of arroyos, bluffs, and more than 700 hand-dug quarry pits. The site has been visited and exploited by humans for millennia, but is only known to contain permanent settlement remains dating to the period when the Antelope Creek culture occupied the area. People belonging to this sedentary culture built stone houses, hunted bison, and grew maize between about A.D. 1200 and 1450. “The assumption is that people who lived in the village were the excavators of the quarry pits, given the time and labor involved,” says local archaeologist Paul Katz. In addition to making tools for their own use, the community also produced hand ax–shaped bifaces for trade. These bifaces could then be used to make a variety of tools.

Alibates flint is known for its distinctive striping and coloring, and archaeologists have identified the site as the source for stone tools dating back to the Clovis culture, between around 13,000 and 11,000 years ago. Some researchers have suggested that Alibates flint was traded or carried beyond the Great Plains and used into the historic period for gunflints. By 1540, when Spanish explorer Francisco Coronado rode through the area, the Antelope Creek people had gone. Texas State University archaeologist Chris Lintz says that upwards of 50 percent of the lithic material found at some contemporaneous prehistoric sites in southern Kansas comes from Alibates. “It’s possible that the end of Antelope Creek played out like The Grapes of Wrath,” he says. “After a devastating drought, these communities may have gradually integrated with their trading partners to the north, possibly Caddoan-speaking ancestors of today’s Wichita, Pawnee, and Kitsai.” 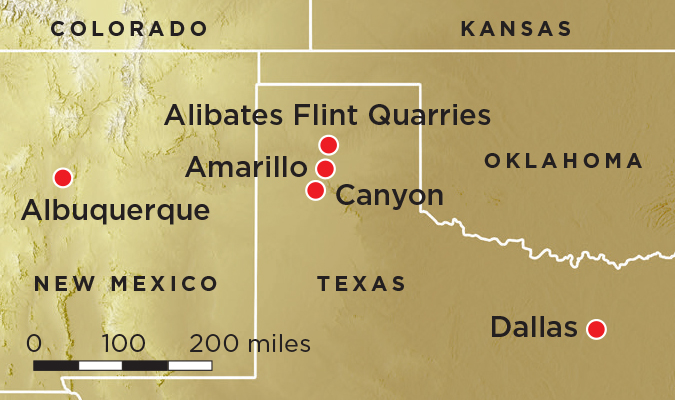 The monument contains both the flint outcrop and quarry pits and the Antelope Creek village ruins. Tours of the ruins are only offered on four Saturdays in October, so contact the monument’s visitor center well in advance of traveling. The visitor center provides background on the prehistoric Great Plains and the Antelope Creek culture. A tour of the village includes a look at several house foundations and a visit to a number of petroglyphs, including depictions of turtles, human feet, and a bison. Ranger-led tours of the flint outcrop and quarry pits are usually available seven days a week. Contact the park for availability and bring your own vehicle, which you will use to follow rangers down a paved road between the visitor center and the trailhead.

Katz and Lintz recommend immersing yourself in the history of the region at the Panhandle-Plains Historical Museum in Canyon before heading out to Alibates. Just over an hour’s drive south from Alibates is Palo Duro Canyon, the United States’ second-largest canyon. Hike through stunning panoramas of orange and pink hues and set up camp for the night under the stars.