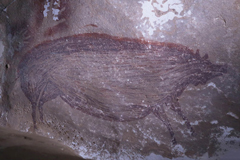 INDONESIA: The well-preserved painting of a pig from the Leang Tedongne cave on Sulawesi may be the oldest known animal image ever recorded. Dating back 45,500 years, the nearly life-size depiction of a small native warty pig was rendered using red ochre. As many as 300 caves in the region have been found to contain paintings, making it one of the largest concentrations of early human wall art.