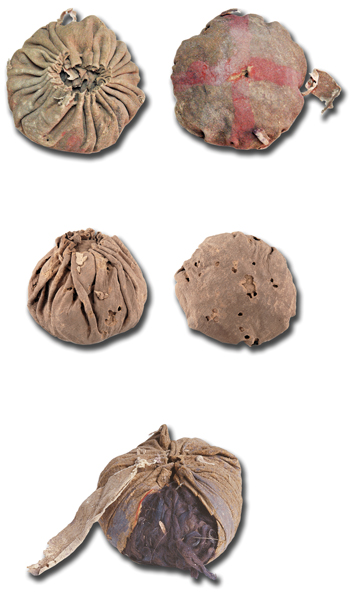 Whether it’s arcing an orange one through a hoop, kicking a black-and-white patterned one into your opponent’s goal, or crushing a white one with perfectly stitched red seams over the center-field fence, in order to play the game, you need a ball. Three young men buried in the Yanghai cemetery in northwest China’s Turfan Basin in the first millennium B.C. wouldn’t have considered going to the afterlife unequipped for a ball game.

At the time, the Turfan Basin was one of the key centers of innovation in Eurasia, explains archaeologist Patrick Wertmann of the University of Zurich. Many local advances adopted by the agropastoralist people typically considered members of the Subeixi culture were associated with horseback riding and mounted warfare. For example, one of the men was interred wearing a leather coat, colored wool trousers—the oldest pair of pants ever found—red leather boots, and an archer’s arm guard, along with a whip and a composite bow, all of which identify him as a rider, and possibly a mounted warrior. 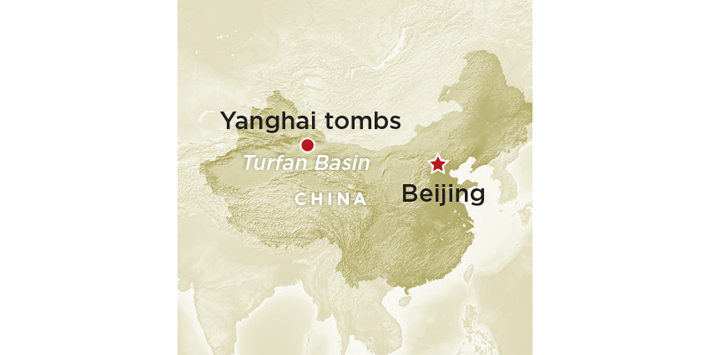 In 10 of the cemetery’s hundreds of burials, archaeologists have unearthed curved wooden sticks that may have been used to play a type of polo, another product of increased horseback riding. But no such sticks were found in the graves with the leather balls, and Wertmann is uncertain how the balls were used. “We’re convinced they were used for ball games, even though we can’t say at the moment for which game in particular,” he says. “But given that the balls have hit marks, and that one of them burst open, they were likely used in a ball-and-bat game.”

Later Chinese texts make it clear that games were seen as an excellent form of exercise, an important means of military training, and an expression of community. “As they are today, sports must have been central to people’s social life,” says Wertmann. “Just like feasting, celebrating, and maybe even gambling, they were communal forms of entertainment, and the players—especially the winners—could gain social prestige.”