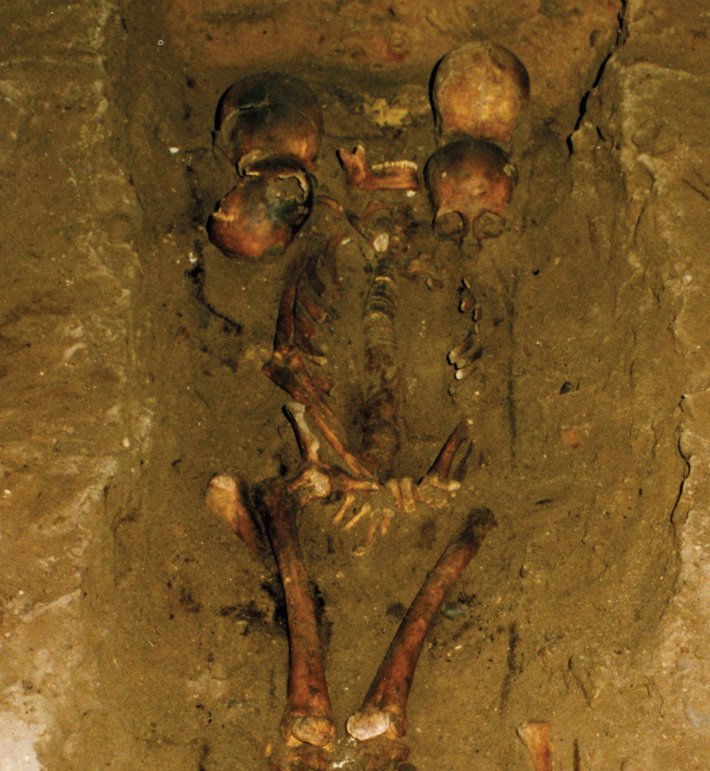 New research into one of Scotland’s most peculiar graves has finally unveiled the identity of its occupants. In 1997, during excavations of a medieval church in the small fishing village of Portmahomack in Easter Ross, archaeologists unearthed a coffin that they originally thought contained the complete skeleton of a man and the disembodied heads of five other individuals. The man was quickly dubbed the “six-headed chief.” Soon after, it became clear that the grave actually contained two complete male skeletons and four additional skulls, but researchers still didn’t know why they had been buried in such a curious way.

DNA testing of some of the bones has now revealed that five of the six people whose skeletal remains were found in the coffin belonged to one extended family, buried between the thirteenth and fifteenth centuries. The first occupant was a man who died from a severe blow to the head. Decades later, his grave was reopened so his cousin or nephew could be interred with him. The skulls of the second man’s grandfather, father, and mother had been placed in the coffin earlier. According to archaeologist Cecily Spall of the archaeological firm FAS Heritage, the remaining skull proved to be several centuries older and unrelated to the others. “This skull derived from the burial of a monk dated to the eighth to tenth century,” she says, “and was likely selected and included deliberately as a holy relic.”