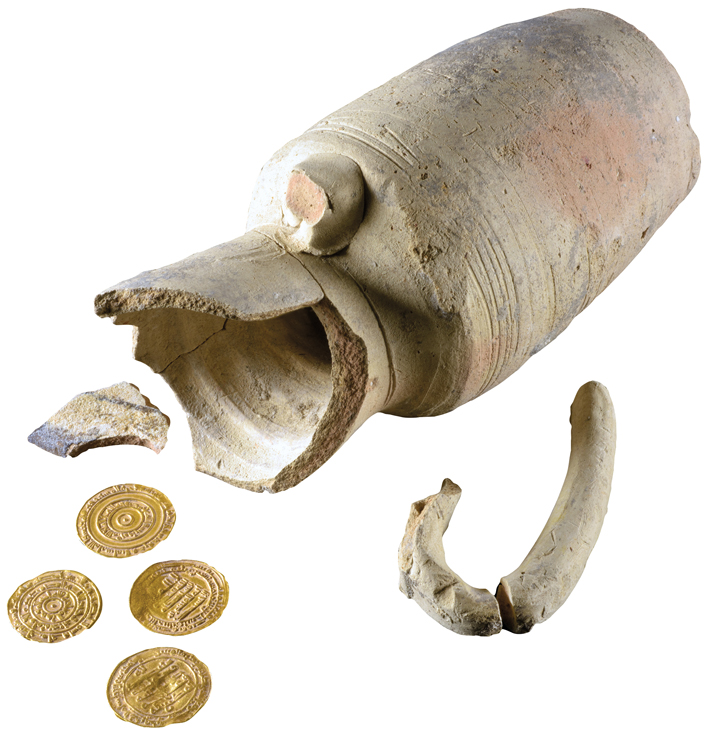 A small ceramic jar containing four gold coins dating to the tenth century A.D. has been discovered during excavations in Jerusalem’s Western Wall Plaza. In contrast to Europe, the medieval Middle East was a highly monetized society, explains numismatist Robert Kool of the Israel Antiquities Authority. Gold coins called dinars and silver coins called dirhams were exchanged whole or in fractional pieces by members of all walks of life. These four coins, all dinars, date to between the 940s and 970s A.D. Two were minted in Ramla, in what is now Israel, by Abu Qasim al-Ikhshid, a governor who administered the region in the name of the Sunni Abbasid Caliphate based in Baghdad. The others were minted in Cairo under the Fatimid Caliphate, North African Shiites who conquered Egypt in A.D. 969. The Fatimids wanted to promote their own brand of Islam and did not accept the Sunni rule of Abbasid Baghdad. “Coins were a platform to disseminate the power and glory of a ruler as the highest secular and religious authority,” says Kool.