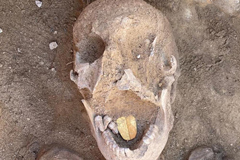 EGYPT: Sixteen rock-cut tombs containing mummies dating to the Greco-Roman era were discovered at Taposiris Magna, near Alexandria. The sacred city was established in the 3rd century B.C. and was an important site for the worship of Osiris, the Egyptian god of the dead and the underworld. Two of the mummies were found with tongue-shaped, gold-covered amulets placed in their mouths, which experts believe were meant to help ensure that the deceased would be able to speak with Osiris in the afterlife.