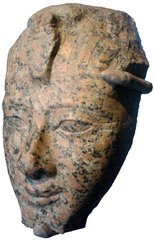 LUXOR—Five tombs have been found hewn from the rock on the northern side of Amenhotep II’s temple by a team of Italian archaeologists. Each of the tombs consists of a shaft leading to a burial chamber containing a wooden sarcophagus. Twelve Canopic jars made of mud brick and sandstone were also found. Such jars were made to hold the organs of the deceased for use in the afterlife. “It’s a very important discovery that highlights the importance of King Amenhotep II’s temple years after the pharaoh’s death,” said Mohamed Ibrahim, Egypt’s Minister of State for Antiquities.