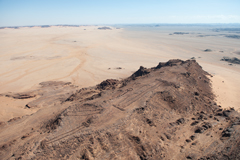 SAUDI ARABIA: An aerial survey recorded more than 1,000 enigmatic rectangular complexes scattered throughout the deserts of northwest Saudi Arabia. First appearing around 7,000 years ago, these huge structures, known as mustatils, are among the earliest known large-scale stone monuments found anywhere, predating even Egypt’s pyramids and Stonehenge. Scholars are unsure why they were constructed, but suggest they were used for religious ceremonies, since the remains of horned animals, especially cattle, are known to have been ritually deposited within them.