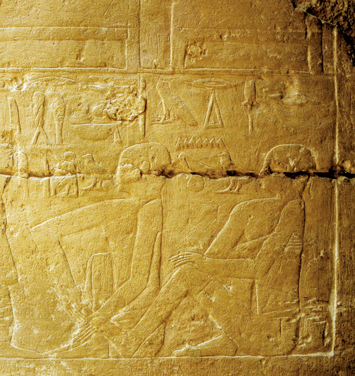 In ancient Egypt, well-being was tied to good hygiene and personal beauty, which were central to the identity of mighty pharaohs and low-ranking commoners alike. Minia University Egyptologist Engy El-Kilany argues that one preoccupation of ancient Egyptians was the beautification and rejuvenation of weary feet. She points to the Middle Kingdom (ca. 2030–1640 B.C.) Papyrus of Kahun, which describes foot massage as treatment for a woman who had aching legs and calves after a long walk. El-Kilany has also cataloged representations of foot washing, foot massage, and pedicures in ancient Egyptian tomb paintings. These include depictions of pedicures in the tomb of two 5th Dynasty (ca. 2465–2323 B.C.) officials at Saqqara who held the title “manicurist of the king.” Reliefs at another tomb at Saqqara, that of the 6th Dynasty (ca. 2323–2150 B.C.) physician Ankhmahor, show masseurs attending to their clients’ feet. El-Kilany believes some of these images may depict not just foot massage, but a form of reflexology. This alternative therapy involves applying pressure to different areas of the feet and hands to alleviate pain in corresponding zones of the body. If the practice depicted in Ankhmahor’s tomb was indeed reflexology, it would further demonstrate that ancient Egyptians took their foot care seriously. “Taking care of the body has always been a common human practice,” says El-Kilany. “It motivated people towards perfection in every single detail in their life.”