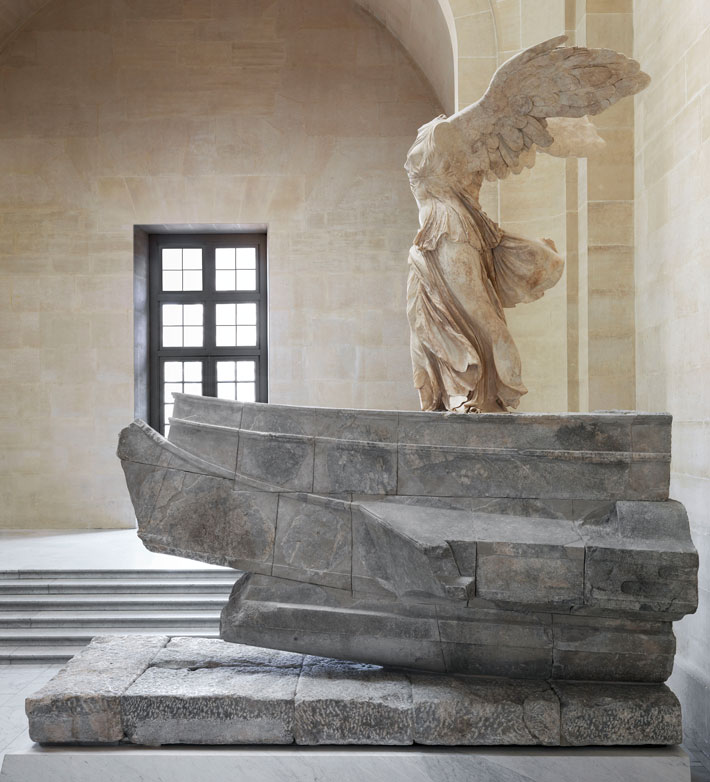 Since it was first displayed in 1883, two decades after its discovery, the nine-foot-tall marble statue of Winged Victory has awed visitors to the Louvre. In the sculpture’s original location above the theater in the Sanctuary of the Great Gods on Samothrace, the winged goddess Nike would have been equally captivating. “The statue was most brilliantly sited,” says archaeologist Bonna Wescoat of Emory University. “Standing where she once stood, you have this extraordinary sight line right down through the heart of the sanctuary.” For archaeologists, though, details about the monument’s dedication and ancient context are obscure. Renewed studies in recent years conducted by an international team of scholars are offering new leads.

Nike is depicted alighting on a warship’s prow that served as the sculpture’s base. A preliminary reconstruction from fragments of a stone ram, a battering device designed to pierce an enemy’s ship, that once protruded from the prow’s front has prompted the team to reconsider who was responsible for the monument’s dedication. The prow is made of blocks of Lartian marble, a blue-gray stone with pink and white veins that was quarried on the coast of the island of Rhodes. In addition to the Nike monument, Greek sculptors used Lartian marble for monumental prow bases erected on Rhodes and the nearby island of Nisyros. One of these bases is strikingly similar in scale and construction to the Nike statue’s base. Based on this, the researchers believe the Rhodians were involved with the monument, which surely commemorated a sea victory sometime in the second quarter of the second century B.C. “Rhodes was a huge sea power, and we know that the Rhodians were active in the sanctuary,” Wescoat says. “It would make sense for them to use this kind of prow as a base.” 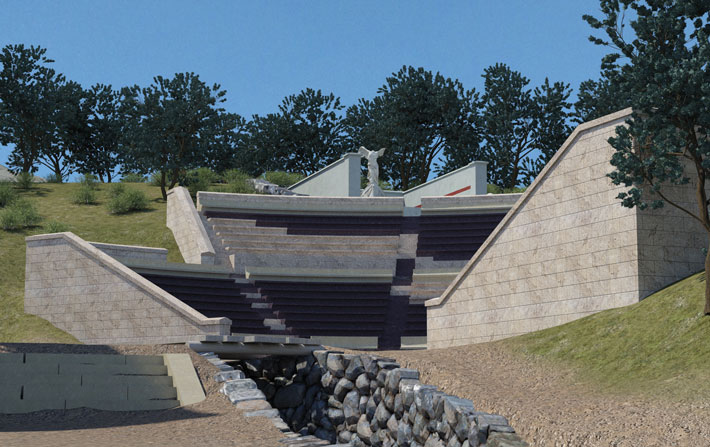 Along with Louvre curator Ludovic Laugier, Wescoat and her team are also studying plaster fragments of large lion heads, the first of which archaeologists unearthed in 1939 within the area surrounding the Nike statue. Because they found water pipes on the hill, those early excavators speculated that the lions were waterspouts for a fountain on which the Nike statue rested. However, the pipes seem to have led to a colonnaded stoa and not to the Nike monument. A large cache of fragments of the lions’ manes were found in storage at the Louvre and still more were discovered during excavations of the theater in 2018. “With close to two dozen locks that seem to belong to at least three heads, we have to come up with a different explanation,” says Wescoat. She and her colleagues are now exploring the possibility that the lion heads might have adorned the roofline of a covered structure in which the Nike sculpture stood. This would have echoed other buildings in the sanctuary whose facades were also decorated with lion heads. However, the researchers cannot rule out that the building was unroofed. This would have allowed visitors to see the Nike sculpture more clearly against the mountains and sky.