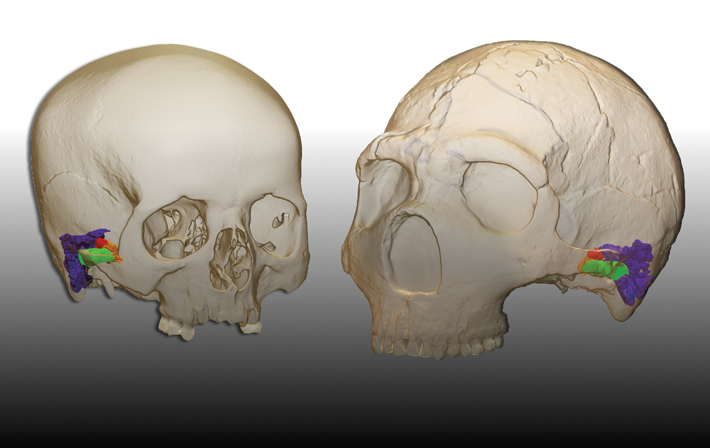 The advent of spoken language was one of the key developments in human evolution, but for speech to have meaning, it has to be heard. Mercedes Conde-Valverde, a paleoanthropologist at the University of Alcala, led a team that used computer models to reconstruct the inner-ear anatomy of fossilized hominins. The specimens included a group of 430,000-year-old pre-Neanderthal hominins from the site of Sima de los Huesos in northern Spain’s Atapuerca Mountains, and a group of Neanderthals from across Europe and the Middle East dating to between 130,000 and 42,500 years ago. The team compared the two hominin groups’ hearing with that of chimpanzees and modern humans. Some previous studies had shown that chimpanzees are able to hear a narrower range of frequencies than humans. Other studies have demonstrated that early human ancestors belonging to the genus Australopithecus, who lived more than two million years ago, had auditory abilities similar to chimpanzees.

Conde-Valverde’s study shows that the Sima de los Huesos hominins could hear a broader frequency range than australopithecines. However, they could not hear as wide a range of sounds as their Neanderthal descendants, who could hear nearly as well as modern humans. These results imply that Neanderthals, who last shared a common ancestor with modern humans about 500,000 years ago, were likely developing spoken languages and the hearing necessary to understand them in parallel with early Homo sapiens. “We arrive at the same point,” says Conde-Valverde, “but along two different evolutionary paths.”