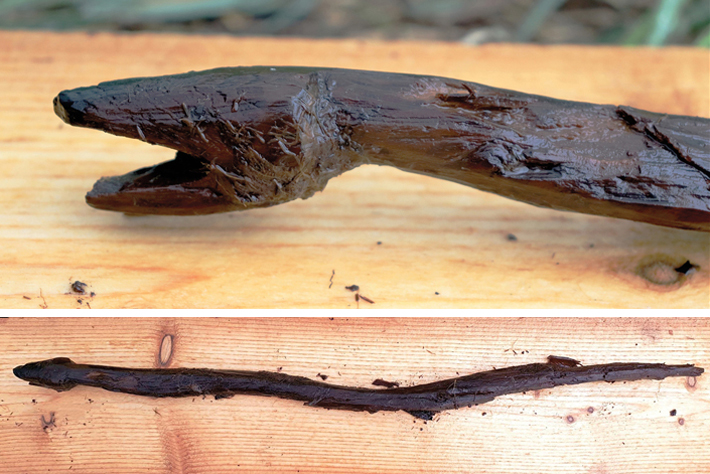 A 4,400-year-old carved wooden snake figurine has been unearthed from a wetland site called Järvensuo 1 in southwest Finland. The figurine, which measures 21 inches long and around an inch in diameter, resembles a grass snake or European adder in the process of slithering or swimming away. “It’s astonishing how well-preserved the snake figurine is,” says Satu Koivisto, an archaeologist at the University of Turku. “The tool marks on its surface are sharp and clearly distinguishable.”

Contemporaneous rock art from the region features human-like figures holding snake-shaped objects. In the area’s pre-Christian tradition, snakes were seen as supernatural spirit helpers that guided shamans to the underworld. “Even though the time gap is immense, the possibility of some kind of continuity is tantalizing,” says Antti Lahelma, an archaeologist at the University of Helsinki. “We may wonder: Do we have a Neolithic shaman’s staff?” Read the original scholarly article about this research in Antiquity.