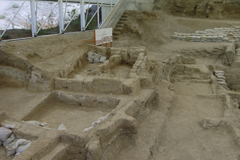 TURKEY: Çatalhöyük is considered one of the world’s earliest proto-urban settlements. At its peak, from 7100 to 5700 B.C., its 8,000 inhabitants lived in densely packed one-room houses without doors or windows, which were entered through small openings in their roofs. A new experimental archaeology project has helped researchers determine that when fires were burning in these houses’ ovens, the lack of ventilation would have exposed residents to dangerous levels of air pollution. This likely caused respiratory illnesses and other ailments.