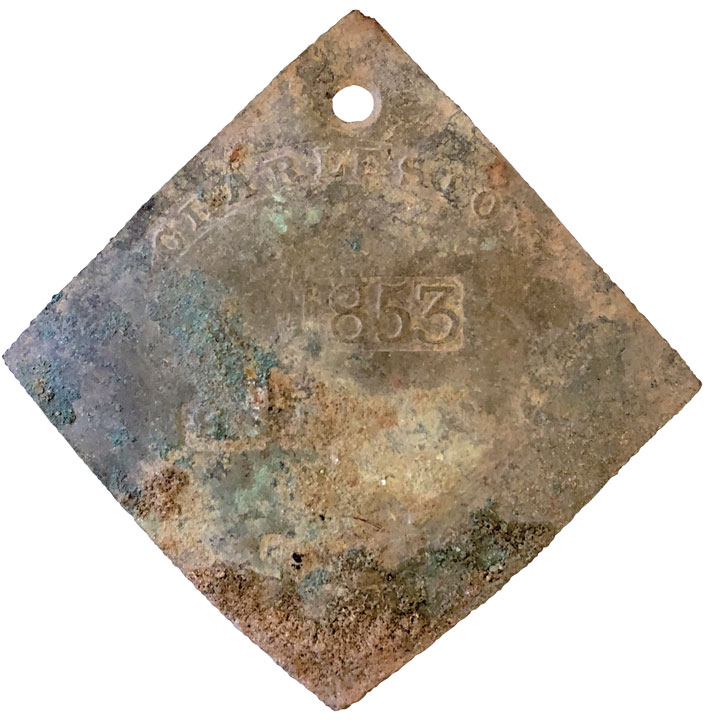 A tag worn by an enslaved person who was hired out by his or her enslaver has been discovered in the remnants of a mid-nineteenth-century kitchen on the campus of the College of Charleston. Such tags, which were issued from the late eighteenth century until 1865, bore registration numbers and identified enslaved people by their trades, such as carpenter, blacksmith, fisherman, or domestic servant. This example, badge number 731, dates to 1853 and is stamped with the word “servant.”

While other southern cities had similar hired labor arrangements, Charleston is the only one that produced such tags, says archaeologist R. Grant Gilmore III of the College of Charleston. “What is uncommon about this discovery is that this object was found in context, unlike many other examples now in the hands of private collectors that have no provenance,” he says. “An enslaved person living in the house may have discarded the tag in the hearth, or someone on loan from across town may have lost it one day.” Property records for the kitchen and those who worked in it may help connect the object with specific enslaved individuals. “These objects are emblematic of urban slavery and the way it worked in Charleston,” says Bernard Powers, a College of Charleston historian. “You have a designation of an occupation and a connection to an individual that breaks through an amorphous group of enslaved humanity and allows for an identity and a personhood to emerge.”