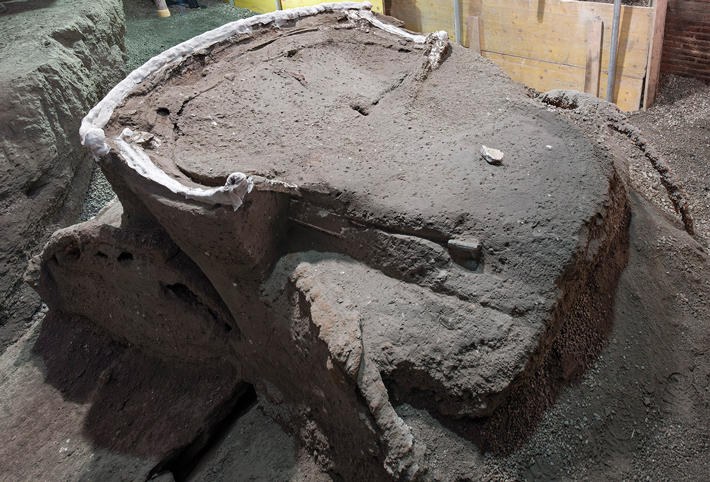 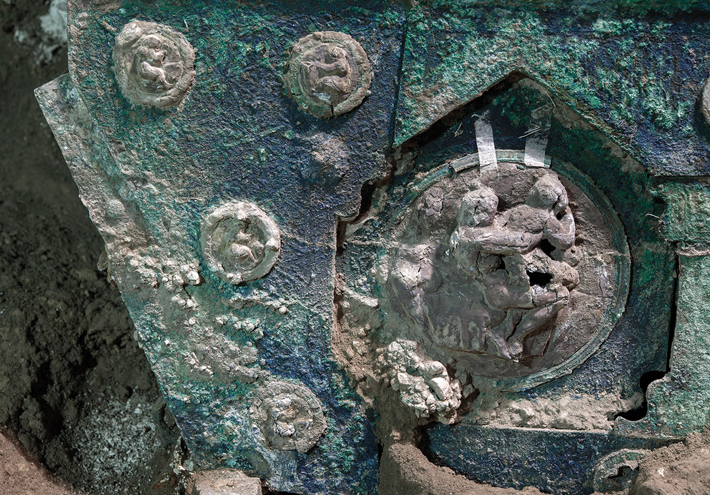 At the sprawling villa of Civita Giuliana just north of Pompeii, archaeologists unearthed a nearly intact four-wheeled chariot, the first of its kind to be found in the Roman world. The chariot, which could seat one or two people, was discovered in a portico adjoining a stable where researchers uncovered the remains of three horses in 2018. The chariot is extremely fragile, so archaeologists digitally documented it before dismantling it into 112 pieces, which they brought to a lab for further analysis and restoration. They also made plaster casts of impressions left by decayed organic material, including the chariot’s wooden steering shaft and ropes that linked mechanical elements of its ironclad wheels.

Researchers believe the chariot is a pilentum, a type of vehicle known only from ancient sources that mention it was used by high-status women and priestesses. Its wooden sides are painted red and black and bear traces of floral motifs. On the vehicle’s rear, circular reliefs made of bronze and other metals feature erotic images, including scenes of frolicking followers of the wine god, Bacchus, and of the god of love, Eros. “The decoration is clearly related to the world of love,” says archaeologist Luana Toniolo of the Archaeological Park of Pompeii. “That’s why we initially thought the chariot could be connected with weddings. Now we think that it was probably used in some kind of countryside ritual.” For more, go to "Digging Deeper into Pompeii's Past."