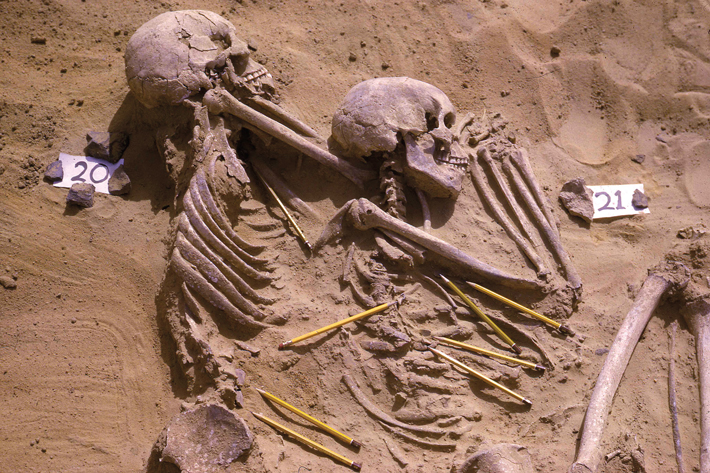 In the early 1960s, archaeologists from around the world descended on the Upper Nile Valley. They were scrambling to excavate ahead of the construction of the Aswan High Dam, which would submerge dozens of archaeological sites, including a 13,400-year-old cemetery called Jebel Sahaba, by the decade’s end. The cemetery, in what is now northern Sudan, was found to contain the skeletons of 61 men, women, and children. While excavating their remains, the late archaeologist Fred Wendorf of Southern Methodist University noticed unmistakable signs of violence—broken bones, smashed skulls, and stone projectiles embedded in the people’s bones or lying near their bodies. He concluded that they were victims of a battle or massacre. At the time, the idea of organized warfare in the distant past was revolutionary. “Prevailing archaeological doctrine in the peace-and-love era of the 1960s held that war and violence were modern inventions,” says Christopher Knüsel, a physical anthropologist at the University of Bordeaux. “There was a long period when archaeologists said warfare didn’t happen in prehistory.” 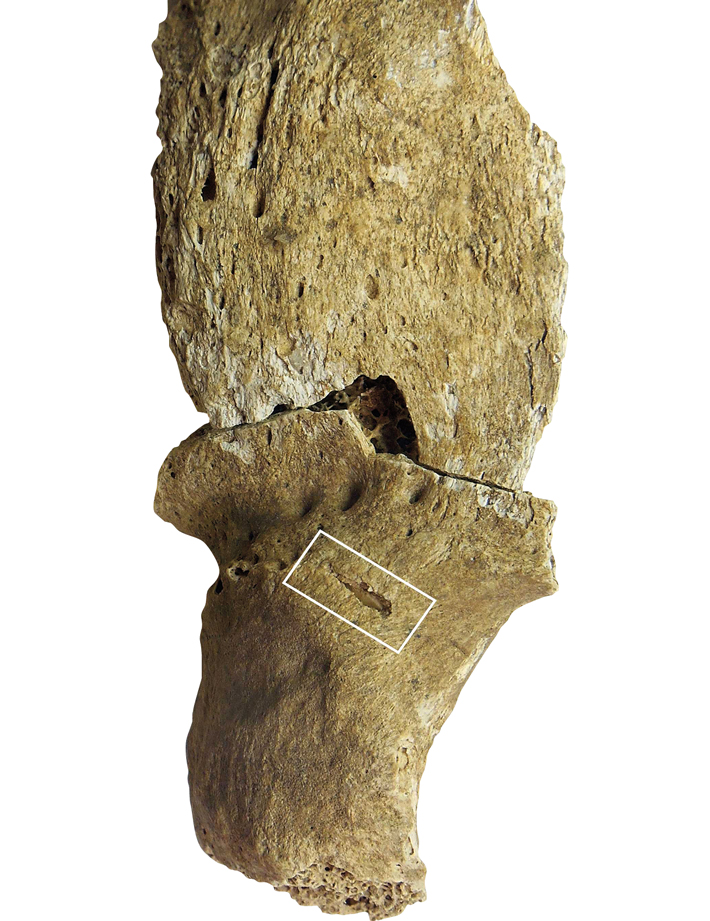 For decades after their discovery, scholars pointed to the skeletons of Jebel Sahaba as the earliest evidence of violence, and even warfare, in deep prehistory. But at the time of the dig, the science of physical anthropology—the investigation of human bones for clues to how people lived and died—was in its infancy, and no comprehensive analysis of the remains was undertaken.

Fifty years after the original excavation, in 2014, Isabelle Crevecoeur, an archaeologist with the French National Center for Scientific Research, began investigating the causes of the millennia-long shift from hunting and gathering to herding and farming in the Nile Valley. She thought one way to shed light on this question might be to reexamine the bones from Jebel Sahaba, now housed in the British Museum. “There was a lot of fantasy around this cemetery,” Crevecoeur says. She and a team of physical anthropologists examined each skeleton and identified more than 100 previously undiscovered signs of trauma or violence, including evidence of arrow strikes. “Methods have really advanced, especially the way we look at cut marks and trauma,” says Daniel Antoine, curator of bioarchaeology at the British Museum. Until recently, researchers weren’t even certain what arrow strikes look like on bone, but new 3-D imaging techniques have made it possible to identify them.

The team’s findings suggest that the cemetery wasn’t a mass grave resulting from a single battle, but something perhaps grimmer: evidence of decades of continual violence among neighboring groups in the form of frequent raids, sneak attacks, and ambushes. Crevecoeur identified numerous skeletons with both healed and unhealed wounds—people who had survived one violent encounter, only to be slain months or years later. On a battlefield, the dead are mostly people in the prime of their lives—for example, young men defending their village. But the Jebel Sahaba skeletons belong mostly to the very young and very old. Crevecoeur suggests that young, healthy people are absent because they would have been more likely to survive an ambush, escape an attack, or recover from their wounds. Equally grim are the individual wounds, including fractured hands and forearms perhaps incurred as people died trying to ward off blows. Some skeletons have evidence of arrow strikes and blows to their backs, as though the people had been struck down while attempting to flee.

When their analysis was complete, the team found that more than 60 percent of the skeletons had visible signs of trauma. “That’s off the scale,” says Knüsel. “This suggests there’s something really unusual happening.” Crevecoeur thinks she knows what. Around 13,000 years ago, the once-lush Nile Valley began to dry up. Within a few millennia, it was essentially a desert oasis hundreds of miles long. For the first time, people living along the river had to compete for resources. “It’s not difficult to imagine a long-lasting climate of tension between groups,” Crevecoeur says. Her findings echo discoveries elsewhere in the world that suggest violence was far more common in prehistory than once thought. “Science is constantly evolving, and these multiple violent events highlight that violence’s cause is more complex than a single battle,” says Antoine. “As long as we curate the dead with care, respect, and dignity, these bodies are windows into the past other sources can’t address.”