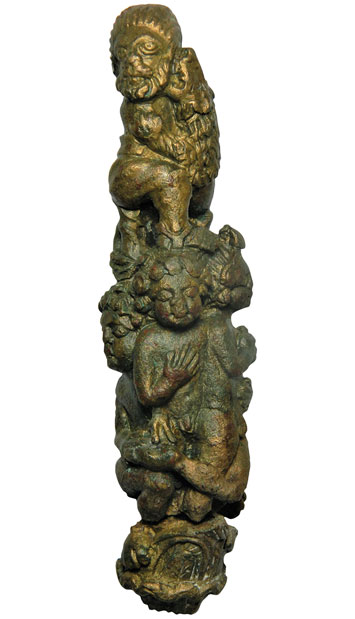 While there are numerous extant large Roman keys—and legend holds that the original key to the Pantheon’s massive second-century A.D. bronze doors survives—few can match this example excavated in a large Roman townhouse in the city of Leicester by archaeologists Nick Cooper and Gavin Speed of University of Leicester Archaeological Services. At the top of the key’s handle, an unarmed man is locked in a violent struggle with a lion. The man is easily identified as a non-Roman barbarian by his trousers—Romans wore tunics, not pants—distinctive sweptback hair, and shaggy beard. The base of the handle depicts four naked, curly-haired youths clutching each other in terror. “Large Roman bronze key handles do exist, and they commonly have animals, and especially lions, with animals in their jaws,” says archaeologist John Pearce of King’s College London, “but this vivid scene has no direct analogies in any medium.” 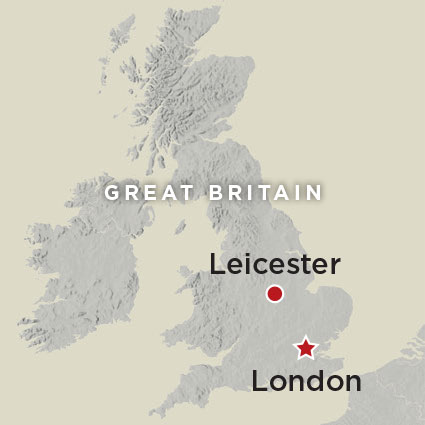 Having no exact parallel with which to compare the handle, Pearce looked to scenes of animal fights shown in contemporaneous North African mosaics to decipher its meaning. He suggests that it depicts a form of execution— and popular entertainment—known as damnatio ad bestias during which bound captives were thrown to exotic beasts in the arena. “The violent imagery may have commemorated a local spectacle sponsored by a Roman magistrate, perhaps the house’s owner,” says Pearce, “or it may have been meant to ward off evil, as doors in the Roman world are symbols of both literal and symbolic vulnerability.” In any case, he says, the key, like the doors it opened, was intended to impress. “The house’s owner is presumably not carrying this huge key in the folds of his toga or cloak,” Pearce adds. “More likely, a doorkeeper stationed at the house’s entrance used it as a kind of badge of office and a form of ostentation.”