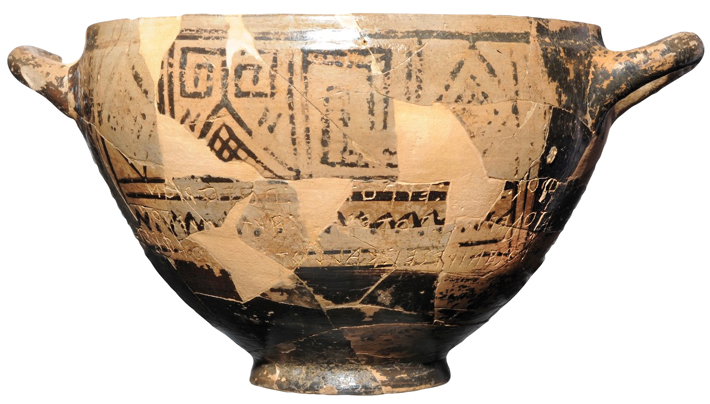 I am Nestor’s cup, good to drink from. Whoever drinks this cup empty, straightaway desire for beautiful-crowned Aphrodite will seize him.

The eighth-century B.C. settlement of Pithekoussai on the island of Ischia in the Bay of Naples was the earliest Greek colony in the western Mediterranean, far from cities such as Athens or Sparta on the mainland. Archaeologists excavating the remote colony’s necropolis in the 1950s were surprised to unearth a cup bearing the earliest known reference to Homer’s epic poem the Iliad. The clay drinking vessel is inscribed with a short poem that makes a bawdy reference to the aphrodisiacal properties of the legendary cup of the king of Pylos, Nestor. For his part, Homer describes Nestor’s cup as “a beautiful cup…studded with golden nails,” a striking contrast to the modest vessel from Pithekoussai.

In the years after its discovery, researchers believed the cup had been buried with the cremated remains of a young person estimated to have been between 10 and 14 at the time of death. Recently, University of Padua bioarchaeologist Melania Gigante and her team reexamined the remains—and the questions surrounding the cup deepened. The team found that the human bones actually came from at least three people, all likely adults. They also identified cremated bones from a variety of animal species in the burial, including a dog, a sheep, a goat, and probably a rooster. “This is the only cremation burial at the site in which there are skeletal fragments from at least three individuals alongside faunal remains,” says Gigante. “This makes the Tomb of Nestor’s Cup even more unique.”