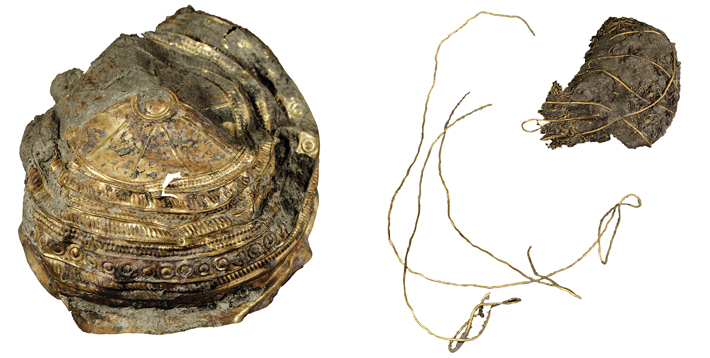 Archaeologists working on the site of a future railroad station at Ebreichsdorf, 18 miles south of Vienna, have discovered a golden bowl decorated with geometric motifs and an image of the sun with 11 solar rays. The bowl is 90 percent gold and measures two inches high and eight inches wide. Inside the vessel were gold bracelets, wires, and remnants of fabric. Over the past two years, a team led by archaeologist Michał Sip of the archaeological firm Novetus has also unearthed nearly 500 bronze artifacts including pins, daggers, and knives at the site, which was a swamp in antiquity. Like the gold bowl, all these objects are in excellent condition, suggesting that they were deliberately deposited during religious rituals of some kind.

The bowl and many of the other artifacts belonged to members of the Urnfield culture (ca. 1300–750 B.C.), who inhabited much of central Europe in the Middle and Late Bronze Age. It is one of only about 30 such bowls ever found. “This discovery was an absolute surprise,” says Sip. “This type of gold vessel, which is connected to bronze production centers in Scandinavia, is the first of its kind in Austria. I couldn’t believe what I was holding in my hands.” Sip thinks the bowl is evidence that long-distance trade networks in central Europe at the end of the second millennium B.C. were used more intensively than previously believed.