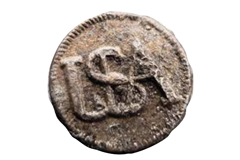 FLORIDA: When conservators cleaned an encrusted button found in a 1782 shipwreck off the coast of St. Augustine, they were stunned by the 3 letters it displayed: USA. That might not ordinarily have caused surprise, but experts knew that when the ship went down, it was carrying British soldiers and loyalists fleeing the Revolutionary War. It’s possible that the button was taken from a Continental soldier’s uniform by a supporter of the crown on the battlefield and saved as a war token.