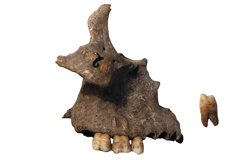 PORTUGAL: Researchers were surprised to learn that a man who was buried in an 8,000-year-old shell midden actually died only around 350 years ago. His remains were discovered in 1930 in the Tagus Valley among much older Mesolithic skeletons. Recent DNA and isotope analysis of the man’s teeth indicate that he was from Senegambia in West Africa and was likely brought to Portugal as an enslaved person. His interment in a prehistoric necropolis may suggest that the site was revered by the local African community.