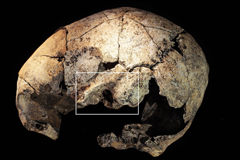 SPAIN: An elderly woman who lived around 5,300 years ago is believed to be the earliest known recipient of ear surgery. Her skull was found at the megalithic tomb known as the Dolmen of El Pendón with two perforations cut into the mastoid bone behind each of her ears. The painful procedure was performed with stone tools in order to treat an infection that could have led to deafness. Because her bones had begun to regenerate, it’s likely the woman survived the ordeal.