When demons began to appear in documents and depictions dating to the early Middle Kingdom (ca. 2030–1640 B.C.), officials, as well as the kingdom’s general population, were already actively participating in the worship of the gods. A series of funerary spells known as the Coffin Texts, which were derived from earlier royal funerary texts, became increasingly common in the tombs of ordinary Egyptians. By this time they had as much right to access the afterlife as did the pharaoh. But the journey to the realm of the dead was an arduous one overseen by a bewilderingly diverse set of human-animal hybrid demons. Egyptians imagined the long route to the afterlife as marked by a series of gates over which these demons watched.

Swansea University Egyptologist Zuzanna Bennett has recently studied more than 400 demons described in Middle Kingdom Coffin Texts, particularly in one known as the Book of Two Ways. Scenes from these texts are depicted on coffins and act as a map to the underworld. According to the Coffin Texts, in order to pass to the afterlife the deceased was required to recite magical formulas, which served as a kind of password, at each gate. Demons would judge the spells successful—or not. Bennett found that while the forms these demons took may seem strange and monstrous, it’s likely they corresponded to the roles the creatures played at the gates. Baboons, who were thought to be able to talk, were often shown as demons who would render judgment on the deceased. Demons who took the form of animals regarded as stealthy, such as snakes, turtles, or scorpions, would attempt to trip up the deceased as they recited the formulas. Felines and cows, thought of as nurturing creatures, would aid a person in their effort to pass through a gate. Thus, demons were not just obstacles to be overcome, but played an essential role in the divine assessment of each person’s journey to the afterlife.

The 18th Dynasty pharaoh Akhenaten (r. ca. 1349–1336 B.C.) is known for radical religious reforms that elevated the sun god Aten to the status of Egypt’s paramount deity. The pharaoh also ordered a new capital city to be built at the site of Amarna, giving workers only a few years to complete this massive undertaking. Akhenaten’s religious reforms did not outlive him. They were soundly rejected by his successors, who also abandoned Amarna. But Egyptologist Kasia Szpakowska has found that one religious innovation that occurred during Akhenaten’s reign did endure for hundreds of years. She has discovered that clay cobra figurines that became common during the New Kingdom (ca. 1550–1070 B.C.) first appeared in the homes of workers living in Amarna.

Excavations of workers’ cemeteries in the short-lived capital city show that common people living there endured grim conditions. Their bones show evidence of repetitive stress injuries, malnutrition, and trauma that suggest they had been victims of severe punishment. “They must have been suffering from intense anxiety,” says Szpakowska. “Firstly, they were moved to a new capital city, and then they seem to have been subjected to harsh working conditions and corporal punishment.” She suggests that these people, grinding out an existence in a forbidding new location where their traditional beliefs were suppressed, turned to the cobra as a divine protector.

As an animal that fiercely defends its own life, the cobra may have been considered a powerful demon that workers could invoke to protect their own ka, or divine spirit. Some 125 fragments of cobra figurines have been found in laborers’ homes at Amarna and in buildings there such as bakeries. It’s possible many more were discarded by excavators who did not initially recognize the significance of the clay objects, which are often simply made and do not always retain their shape. The tradition of revering these humble idols eventually spread throughout Egypt. Judging by the frequency with which the figurines are found in border forts, it seems soldiers had a special connection to the cobra demon. They may have called upon its support when they found themselves living in strange conditions, far from the familiar comforts of home.

At the same time that artists began to depict demons in Middle Kingdom (ca. 2030–1640 B.C.) tombs, carvings of these beasts also appeared on a type of artifact Egyptologists have dubbed “magic wands.” Some 230 of these curved objects, usually made of highly polished hippopotamus ivory and resembling the shape of tusks, are known. Though many are worn from use, it’s clear that most were incised with depictions of demons wielding knives. Some Egyptologists believe the ancient Egyptians imagined the wands themselves as magic knives. High-status Egyptians who could afford them wielded these powerful instruments against supernatural forces by calling upon the power of the demons to ward off evil. It’s possible the Egyptians of the Middle Kingdom developed these wands as a response to the period of religious and ideological uncertainty that followed the collapse of the Old Kingdom (ca. 2649–2150 B.C.). With the memory that traditional centers of power and religion had been in disarray, perhaps these wands gave some high-ranking Egyptians the confidence to tap into the power of demons and keep the forces of chaos at bay.

Egyptologist Frank Vink notes that some Middle Kingdom spells intended to be recited during pregnancy and throughout early childhood include a word that scholars interpret as “amulet.” Perhaps, Vink suggests, magic wands were the amulets being cited in these spells. Tauret, the powerful hippopotamus goddess, was associated with childbirth, and the fact that most of the wands were made from hippopotamus tusks might link them to her special role as the protector of mothers and young children. One example of a Middle Kingdom magic wand has a cord still attached to it that could be worn around the neck. It’s possible that mothers and children alike wore these objects as amulets to call upon knife-wielding demons to protect them during the most vulnerable periods of their lives. 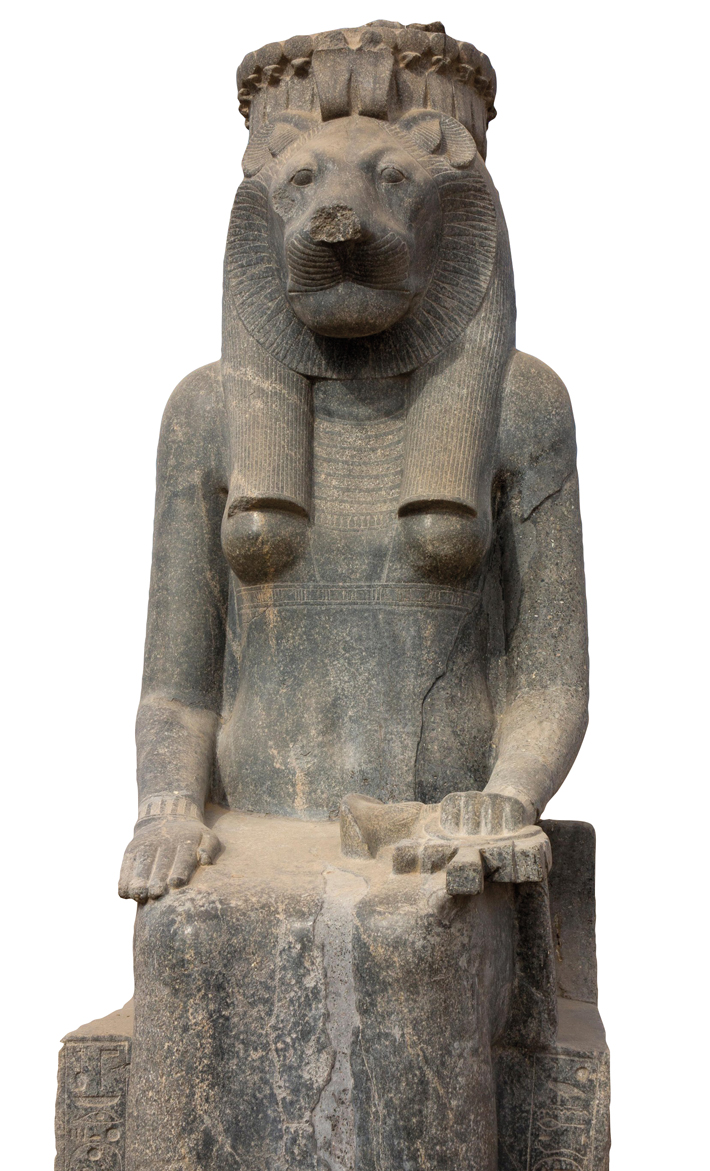 When they were first depicted in the Middle Kingdom (ca. 2030–1640 B.C.), demons were often shown gripping fearsome knives to ward off malevolent forces. They not only held these weapons with their hands or forepaws, but, also, in rare instances, with one foot. Egyptologist Kasia Szpakowska has found that by the New Kingdom (ca. 1550–1070 B.C.), a few demons seem to have acquired a new means of wielding these weapons. Szpakowska has identified at least 30 depictions of demons brandishing knives with both of their feet or hindpaws. None of the artifacts identify the demons’ names or explain what, exactly, they are doing. But, by studying the placement of the figures, Szpakowska concluded that at least half seem to be engaged in some kind of dance. She believes the dance may be similar to the haka performed by the Maori of New Zealand. The haka, sometimes presented as an intimidating war dance, involves simple steps—stomp to the side, face forward, and then stomp to the other side. The New Kingdom demons may have been engaging in similar moves. Perhaps, thinks Szpakowska, the Egyptians were trying to show these demons as warrior dancers ready to protect their charges with knives bristling from every available limb.