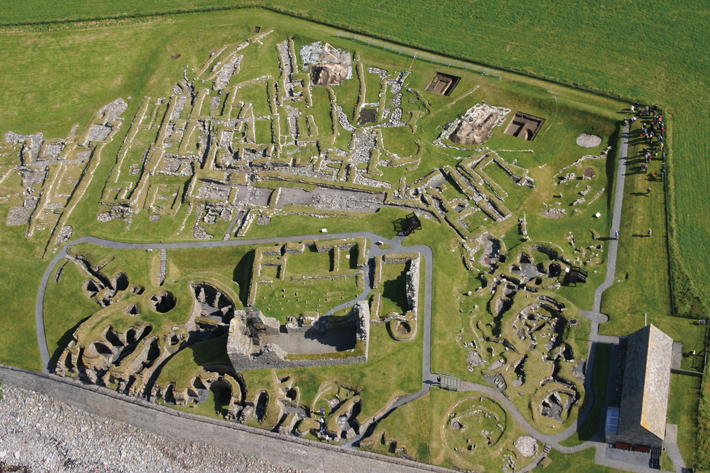 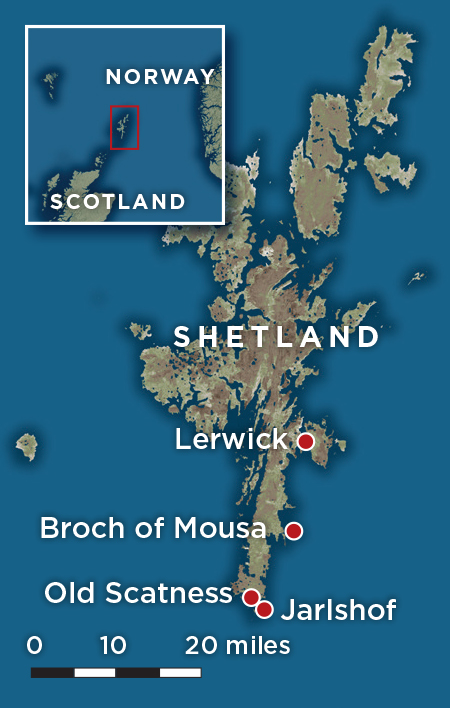 When the novelist Sir Walter Scott visited the southernmost tip of the Shetland Islands in 1814, he fell in love with the islands’ vivid sunsets, crashing waves, and growling puffins. There he encountered the ruins of a sixteenth-century Scottish laird’s house, which he named Jarlshof, combining Germanic words that mean “Earl’s House.” When he visited, Scott didn’t realize that the bright green turf surrounding Jarlshof hid the remains of ninth-century A.D. Norse longhouses and even older Iron Age, Bronze Age, and Neolithic settlements. In the 1890s, a series of storms revealed traces of these earlier periods of occupation, evidence that Jarlshof had been home to hearty farmers who, for thousands of years, had adapted to life on the unforgiving North Atlantic archipelago. Archaeologist Stephen Dockrill of the University of Bradford says that Jarlshof’s first inhabitants came to Shetland as early as 3600 B.C. and began cultivating grains and raising sheep and pigs. “We excavated middens that suggest a continuity of settlement over generations despite the area being particularly vulnerable to environmental impact,” says Dockrill. “Growing seasons are very short, and salt and sand from bad storms can ruin an entire year’s crop. But somehow people learned to manage the land.”

Archaeologist Julie Bond, also of the University of Bradford, says that throughout the Bronze Age and Iron Age, local people absorbed ideas from traders who came from across the British Isles. During the Iron Age, inhabitants began to build new types of structures, including sunken stone roundhouses called wheelhouses and round, tower-like structures called brochs. Researchers believe that ruling families lived in the lower levels of brochs, while the upper levels were used to store grain and other valuable resources. “People at Jarlshof remodeled older structures or built on top of them in order to avoid encroaching on planting fields,” says Bond. “In just one location, you can see how styles of architecture changed over the course of the centuries.” Viking settlers arrived in the ninth century A.D., introducing deep-sea fishing technology as well as the Norse language. Scotland annexed the Shetland Islands in the fifteenth century, and locals today, most of whom know only a few Norse words, celebrate the archipelago’s Scottish and Scandinavian heritage.

Start in the visitor’s center to learn about the history of Jarlshof and see artifacts uncovered during excavations at the site. Signs dotting the roughly five acres of grounds explain which stone structures date to the Neolithic period, the Bronze Age, the Iron Age, the Norse occupation, the medieval era, and the early modern period.

Take a boat tour from Shetland’s bustling hub of Lerwick to see the Broch of Mousa on the enchanting small island of Mousa. Thought to have been built around 100 B.C., it is the tallest broch still standing, rising to a height of 42 feet. 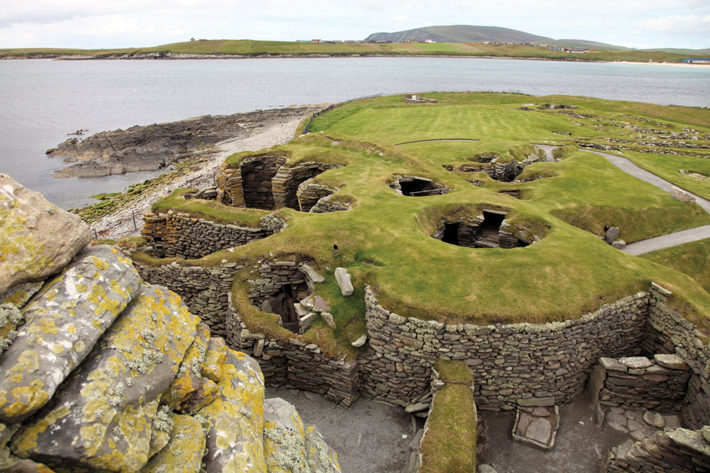