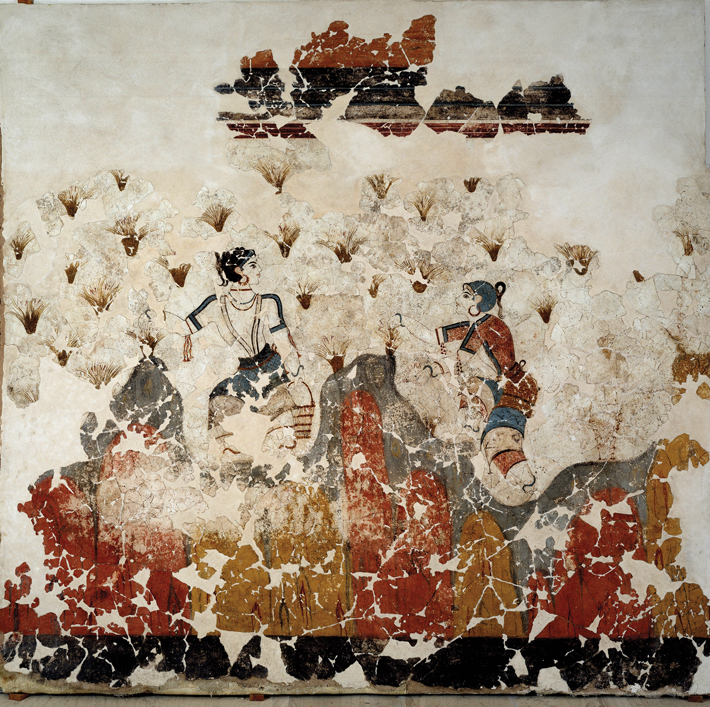 Sometimes referred to as “red gold,” saffron is the world’s most expensive spice. For thousands of years, it has been highly prized by many cultures across the Mediterranean world and the Near East for its use as a colorant, perfume, and food additive, and for its medicinal properties. Saffron is obtained from the stigmas of Crocus sativus, or saffron crocus, which only reproduces with human intervention. It can take as many as 8,000 flowers, which must be harvested by hand, to produce a single pound of saffron. The earliest evidence of people using wild crocus comes from saffron-derived pigments found in 50,000-year-old cave paintings in Iraq, but experts have debated when and where the plant was first domesticated.

New research drawing on both ancient art and genetic sequencing points to one place: Bronze Age Greece. This research has determined that the earliest known depictions of domesticated saffron are found in Minoan Age frescoes from the Greek island of Santorini that date to around 1600 B.C. “The saffron depictions in the Aegean artworks provide timelines into the past, pointing us to geographic locations,” says TU Dresden geneticist Tony Heitkam, “but to find out where saffron first arose, we also need to know where to look for its wild parents.” Genetic analysis revealed that the closest known relative to domesticated C. sativus is the wild C. cartwrightianus, which is found only in southern Greece. Thus, it is likely that the valuable plant was first domesticated there early in the second millennium B.C.